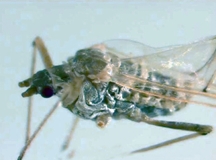 Aphid (jabpoka) minute to small (1-10 mm) soft-bodied, pear-shaped plant sap sucking insects of the family Aphididae under the order Homoptera. They are of considerable agricultural importance because of their polymorphism, host alternating behaviour, viviparity, and remarkable ability of transmitting plant viral diseases. Some of them cause direct injury to the plants by sucking the plant sap, and as a result various symptoms are produced on plant parts. They are mostly gregarious and the symptoms are, therefore, generally localized. But as in most cases the tender growing parts of the plants are infested, the symptoms, viz, leaf curling, shoot twisting, galls, pseudogalls, etc, are usually found in these regions. They also cause damage to the plants indirectly by secreting copious honeydew that occlude the stomatal openings of leaves hampering the normal physiological processes. Deposition of honeydew on the plant surface also allows the growth of fungus which in turn proves detrimental to plant life. Aphids may be winged or wingless, and presence of a pair of cornicles is a characteristic feature.

Aphids enjoy a more or less cosmopolitan status and are found in abundance in temperate regions. Globally, over 250 aphid species are economically important pests of agricultural and horticultural crops. In Bangladesh, aphid fauna are mostly unrecorded; only about 30 aphid species under 20 genera infesting 58 host plants have been listed. This represents less than 0.75% of the world and 2.94% of the Oriental and 4.59% of Indian aphid fauna.

In Bangladesh, at the approach of cool autumn weather, after the monsoon rains, the winged parthenogenetic alate aphids start to appear from their summer aestivation sites. They select their hosts, and begin their reproduction parthenogenetically. Aphids build high populations on their host' during mid-winter and the populations start to decrease with the increase of temperature. By the end of spring they start to migrate to the roots or crevices of other plants (usually weeds) for summer aestivation. [Bidhan Chandra Das]