Administration Ashuganj Thana was formed in 1984 and it was turned into an upazila on 25 July 2000.

History of the War of Liberation On 14 April 1971 freedom fighters Abul Hossain, Shahjahan, Lance Nayekk A Hai, Subedar Sirajul Islam and Sepahi Abdur Rahman were killed in an encounter with Pak army. During the War of Liberation the Pak army used to torture and kill suspected Bangalis at a slaughter place near Ashuganj Silo. On 9 December 1971 the Pak army destroyed part of Ashuganj-Bhairab railway bridge on the Ashuganj side by dynamite explosion. On the assumption that the Pak army left Ashuganj after destroying railway bridge the allied forces advanced towards Ashuganj to occupy it. As soon as they reached within 50 yards of Asuganj Thermal Power Plant the Pak army launched heavy attack on the 18 Rajput Regiment and killed 70 members of the allied forces including 4 officers. The Pak army left Asuganj on 10 December 1971. 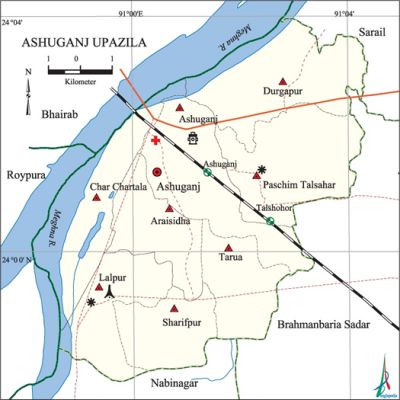