Asiatic Society, Calcutta (1784) the first learned organisation in Bengal to study Asian civilisations scientifically, particularly of South Asia. The idea of founding an association for pursuing systematic research on Asia in general and South Asia in particular first came from Sir william jones (1746-1794) who joined the Calcutta Supreme Court as a Puisne Judge in 1783. Already a group of Company servants including nathaniel brassey halhed, charles wilkins, HT Colebrooke was quite actively involved in oriental studies. warren hastings, the Governor General, himself was deeply interested in Indian classical languages and literature. Therefore, Jones' proposal to set up a regular organisation for oriental studies had received enthusiastic support from other colleagues at the fort william. 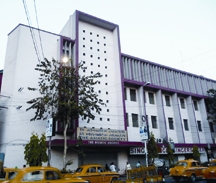 On January 15, 1784, thirty such interested Europeans met in the Grand Jury Room of the Supreme Court at Calcutta and adopted the proposal of Jones for founding the institution, which was christened as "The Asiatick Society". William Jones became its first President and continued in this position until his death in 1794. Warren Hastings was made the Patron of the Society. Since then the position of the Patron was held by the Governor General and lately by the Bengal Governor down to 1947. George Hillarow Barlow was elected the first Secretary of the Society. Any European person interested in cultivating and promoting knowledge could seek membership of the Society. The membership of the Asiatick Society was thrown open to learned natives in 1829 when five of them - Prasanna Kumar Thakur, dwarkanath tagore, Shibchandra Das, Rasamoy Datta and Ram Kamal Sen - were elected members. Since then persons of all nationalities irrespective of religion, race and caste could apply for membership.

The most prestigious and influential work of the Asiatic Society is its publications under the Bibliotheca Indica series. It consists of an extraordinary series of oriental texts in Sanskrit, Arabic, Persian, Bengali, Tibetan and other Asian languages and their translations. The Society's Library, Archives and Museum have rich collections.

The Asiatic Society, located now at its own site at 1, Park Street, Calcutta, had played the pioneering and most crucial role in discovering India's past. The reconstruction of the ancient Indian history is almost entirely the achievement of the Asiatic Society. The great Indologists and Orientalists like William Jones, Charles Wilkins, HT Colebrooke, BH Hodson, Francis Wilford, Samuel Davis, HH Wilson, James Prinsep, Edward Fell, henry ferdinand blochmann, alexander cunningham, hentry beveridge had created their intellectual marvels at the Asiatic Society, which gave them a forum for their investigation through its publication facilities and Journals - Asiatick Researches, Gleanings in Science, Journal of the Asiatic Society of Bengal and various Memoirs. The proceedings and actual publications of the Society shall reveal its role in the reconstruction of the history of modern south Asia from the debris of the past. In 1814, Dr Nathaniel Wallich, a Danish botanist proposed to establish a museum in the Society. According to his proposal, a museum was established at the Society on February 2, 1814. Wallich was made the first superintendent of the museum. The Museum had several sections, such as archaeological, ethnological, geological and zoological. Wallich developed the museum by collecting articles from Indian and European donors. Many Europeans donated their collections. Among the Indians who donated their collections to the museum include Ram Comul Sen, Begum Sumroo, Kalikrishna Bahadur, Mathuranath Mallik, Radhakanta Deb, and Rajendralal Mallik. In December 1814 the Society inaugurated its Art Gallery. The Asiatic Society inaugurated in 1841 its Museum of Economic Geology. All these collections under various sections later made the initial objects of the indian museum of Calcutta established in 1866.

The transactions of the Asiatic Society were published with the title Asiatick Researches first published in 1788 and the journal was not published by the Society. But by a private concern The Asiatic Researches became immensely popular in the European scholarly and scientific society. It reason was that the writings published in it announced for the first time the antiquity and greatness of Indian civilization. Through its researches and discoveries, the Asiatick Society came in contact with the other learned institutions in Europe and America. The Asiatic Society also investigated history, languages, literatures, folk-lore, vocabularies, manners and customs, religions, music, ethnology, physics, meteorology, geology, botany, zoology, paleobotany, geography and so on. What is most revolutionary about the Asiatic Society's contributions to knowledge is the study in linguistics, which gave birth to the movement orientalism. The Society began to publish edited the classic ancient and medieval texts in its Bibliotheca Indica Series 1848 onwards. This series has very greatly contributed to the enrichment of oriental knowledge.

What is particularly remarkable is the fact that the Asiatic Society had a tremendous impact on the trends of the intellectual exercises of the world. For the study of mankind, Orientalism emerged as a powerful tool to interpret civilisations. Learned organisations like that of the Asiatic Society were springing up all over the civilised world under the same rubric. In 1829 was established the Royal Asiatic Society of Great Britain and Ireland with its chapter at Bombay, called Bombay Royal Asiatic Society. Asiatic Societies were also established in Sri Lanka, Malaysia, Tokyo, and America (with a different name Oriental Academy), and lately in Pakistan (to-day's asiatic society of bangladesh).

The organisational set-up of the Society was adopted from that of the Royal Society and it is still maintained by and large. From the beginning the Asiatic Society had a patron who had been always the head of the State. As in the past the Society has now a Council to administer its affairs with a President, a Vice President, a Treasurer, and a number of Additional Members in charge of various disciplines. The Society admits members, honorary members, associate members and corresponding members. The Council elects outstanding orientalists to fellowship. The Society's businesses are transacted in its Monthly Meetings. Members elect the Council for a term of one year. At present the Asiatic Society is funded by the Central Government under the Asiatic Society Act, 1984 which declared 'the Asiatic Society in Calcutta to be an institution of national importance. [Sirajul Islam]