Atiya Mosque is situated in the village of Atiya under Delduar Upajilla in Tangail district, about six kilometers south of the district headquarters. It stands on the east bank of the Louhajang River. 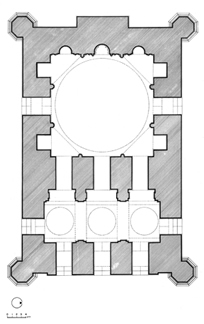 The mosque is small in size, measuring externally 18.29m x 12.19m with 2.23m thick walls. It is rectangular in plan, consisting of a square single domed prayer chamber and an attached rectangular corridor on the eastern side covered with another three smaller domes.

The eastern facade has three arched entrances; the middle one is slightly larger than the others. The arches are of the four-centred variety. The main prayer chamber is accessible from the corridor through three smaller doorways. The mosque has four other openings, two each on the south and north sides. On the qibla wall there are three decorated mihrabs, the central one has an external projection on the west side.

At the four outer corners are huge octagonal towers, marked by horizontal mouldings at regular intervals. The towers, divided into stages by stringcourses, rise up to the roof and are crowned by flat fluted cupolas with lotus and kalasa finials.

The main dome of the mosque is carried on squinches, and the three over the eastern corridor are carried on pendentives. It may be pointed out here that the main dome collapsed some years ago and was rebuilt recently. The three smaller domes were originally fluted, but now they are covered with lime plaster. The main dome is the crowning feature of the mosque, and rests on an octagonal drum. The domes have kalasa finials on a lotus base and blind merlons around their drums. The cornice is prominently carved and the parapet is battlemented. 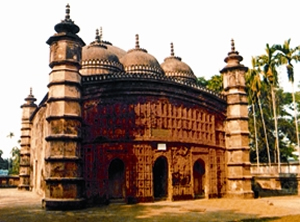 The most striking of all the features of the mosque is the curvilinear cornice, a thoroughly indigenous feature of Bengal architecture, the origin of which may reasonably be traced to ordinary thatched huts with drooping eaves. Here, in fact, the transformation of bamboo and thatched constructions into brick architecture is aesthetically pleasing and structurally expedient.

In the field of decorative art, especially in terracotta and carved brick ornamentation, the craftsmen of Bengal made a distinct contribution. The structural feature of the Bengali villager's plaited grass huts is reflected in the close-set panel-decoration of the facade of Atiya Mosque. The mosque blends harmoniously both the Sultanate and Mughal features of Bengal architecture.

According to an inscription (preserved in bangladesh national museum, Dhaka), the mosque was constructed in 1019 AH (1610-1611 AD) during the reign of Emperor jahangir by Sayeed Khan Panni, son of Baizid Khan Panni, in honour of Shah Baba Kashmiri. The builder also excavated a big tank on the western side of the mosque. Atiya came into prominence after the arrival of a great saint Shah Baba Kashmiri, who propagated Islam in this part of Bengal. Now a replica of the inscription, fixed over the central doorway of the mosque, indicates that it was erected in 1018 AH (1609 AD).

The Atiya Mosque is now a protected monument under the Department of Archaeology, Bangladesh. Earlier, the mosque had undergone repairs twice, once by Rawshan Khatun Chaudhuri in 1837 AD, and again by Abu Ahmed Gajnabi in 1909. [Ayesha Begum]