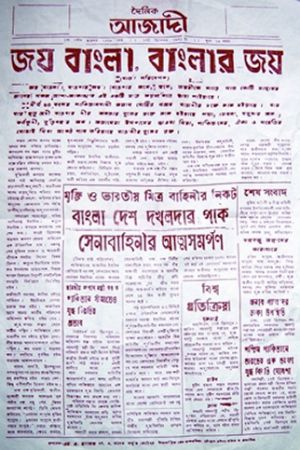 Azadi, The a daily Bangla newspaper published from Chittagong. Abdul Khaleque Engineer was the editor of the paper and it was printed from the Kohinoor Electric Press. The paper was first published on 5 September 1960. It was published in crown size and its initial price was 2 annas (twelve paisa).

The time of the publication of the Azadi represented the period of preparation for the culmination of political turmoil in East Pakistan. The Bangali nation moved towards the liberation movement through the process of education movement of 1962, Six Point movement, movement against Agartala conspiracy case and the mass upsurge of 1969. The Azadi played a vital role in favour of the democratic forces of the country. During Pakistani rule, the Azadi was uncompromising on the issue of the freedom of press. For this reason, Pakistan government kept the Azadi in a black list and deprived it from government advertisement for a year. During the war of liberation the publication of the Azadi was forced to be suspended for three months. From 18 June 1971 the journalist of the Daily Azadi continued its publication in the face of threats and risk of life. The Azadi published in red banner head the news of the surrender of Pakistani forces on 16 December 1971.

The Daily Azadi has its regular sections such as Sahitya (literature), Kheladhula (sports), Agamider Asar (feature for next generation), Mahila Mahfil (female feature), Parda (cinema) and Mancha (drama) and other feature as usual. At its inception, Abdul Khaleque Engineer was the editor and publisher of the paper. After his death on 25 September 1962, his son-in-law Professor Mohammad Khaled took office of the editor and continued till 2003 when he died. Afterwards, Abdul Malek, son of Abdul Khaleque Engineer, took over charge of the editor of the paper. He was erstwhile the managing editor.

The Daily Azadi consists of twelve to sixteen pages in volume with eight pages of four colours. The initial crown size of the paper was changed into demy size, and later into international size of 14" x 22.75". The Daily Azadi is now being published from its own campus at Momin Road of Chittagong. The price of the paper is now Taka 6 per copy. [Ahmad Mamtaz]