Bali Khela (literally, game of strength) a folk wrestling game unique to chittagong. The exact origin of this sport is not known but it is traditionally believed to have started during the Mughal period. Many Hindu and Muslim families still bear the titles of 'malla' or 'bali'. Affluent zamindars used to keep on their establishment well-known wrestlers for security and status. Their physical prowess was judged through bali khela. The winners used to be hailed as 'bali' (powerful). 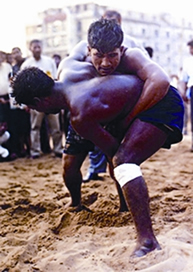 The present-day bali khela was introduced in 1909 by Abdul Jabbar Saodagar. His aim was to organise the country’s youth against British rule and to prepare them for fighting. The golden age of this sport lasted from the end of the First World War to the end of the Second World War. Bali khela used to be organised throughout Chittagong district from Chaitra to Baishakh with great fanfare. This was the time when many Chittagonians were working in Yangon or Myanmar. These people were quite solvent and patronised bali khela. In course of time many other influential people  came forward to patronise this game.

Professor abul fazal, former vice chancellor of Chittagong University, used to arrange bali khela on the university campus. AK Khan, industrialist and a central minister of Pakistan, is known to have participated in bali khela in his youth. Nawab Abdul Ghani of dhaka is also known to have organised bali khela at shahbag a number of times.

Though the former grandeur of bali khela has faded, Jabbar's bali khela still continues to attract crowds in Chittagong. A three-day fair is held on the occasion.

Bali khela is given advance publicity by beating drums. Invited balis enter the arena accompanied by their 'sahabs' or companions and supporters beating drums. The contest takes place in several phases. The final winner is carried aloft by his jubilant supporters along the roads. [Mahbubul Haque]