Bamna Upazila (barguna district) area 101.05 sq km, located in between 22°11' and 22°21' north latitudes and in between 90°00' and 90°07' east longitudes. It is bounded by kanthalia on the north, patharghata and barguna sadar upazilas on the south, Bishkhali river and betagi upazila on the east, mathbaria upazila on the west.

Administration Bamna Thana was formed in 1968 and it was turned into an upazila in 1983. 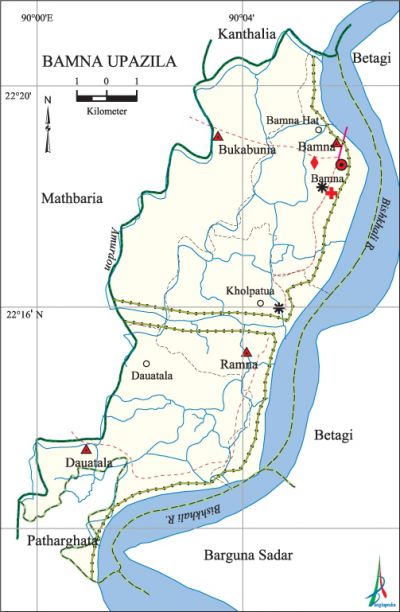 History of the War of Liberation During the war of liberation in 1971 the Pak army set on fire a number of houses of this upazila. The headquarters of the No. 9 sub-sector was at Bukabunia of the upazila. Bamna upazila was liberated on 23 November 1971.

Religious institutions Mosque 240, temple 31, tomb 1, most noted of which is the tomb of Hazrat Khwaja Mohiuddin Hasan Chisti.