Bandarban Sadar Upazila (bandarban district) area 501.99 sq km, located in between 21°55' and 22°22' north latitudes and in between 92°08' and 92°20' east longitudes. It is bounded by rajasthali upazila on the north, lama upazila on the south, rowangchhari and ruma upazilas on the east, rangunia, chandanaish, satkania and lohagara upazilas on the west. Marmiana Tang and Bothil Tang hills of this upazila are notable. There are a number of waterfalls in the upazila.

Administration Bandarban Thana was formed in 1923 and it was turned into an upazila in 1984. 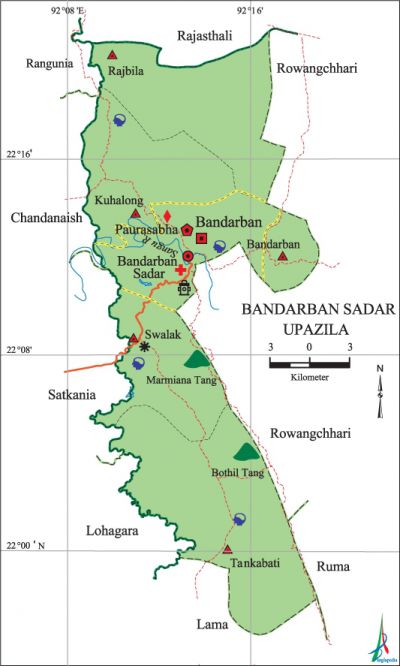 History of the War of Liberation During the war of liberation in 1971 Bandarban was under Sector 1. The Pak army conducted mass killing and plundering in this upazila; they also set many houses on fire. '

Hats, bazars and fairs Hats and bazars are 7, fairs 1, most noted of which are Bandarban, Suwalak and Balaghata hats. Purnia Mela of Bomang Raja is notable.