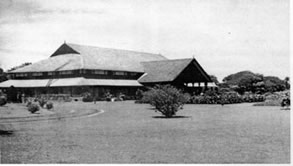 The present site of Bangabhaban has a long history. During the sultanate period a saint called Hazrat Shahjalal Dakhini used to reside in the area. He along with his disciples were mercilessly killed by the men of the ruling Sultan (881 AH). He along with his disciples were buried here. With the passage of time, the place became famous as a mazar, and later was abandoned. During the Mughal rule, Mirza Mukim was the official in charge of Nawara Mahal under subadar mir jumla. His residence was on the southern side of Purana Paltan Maidan. There were two big hillocks inside and outside of his residence. One of them still lies within the boundary of Bangabhaban. The large tank inside came to be known as Motijheel (lake of pearls) because of the legend that Mirza Mukim's daughter used to throw her ornaments there. The area was probably abandoned towards the end of Mughal period. There is still a building called Manuk House within the Bangabhaban compound. It is conjectured that it belonged to an Armenian zamindar named Manuk during British rule. Nawab khwaja abdul ghani of Dhaka bought the place from Manuk. He also built a bungalow there, which he named as Dilkusha Garden.

On the partition of benga in 1905, the government of East Bengal and Assam bought a portion of the place, and a building was constructed for the Viceroy of India. The Viceroy used to stay here during his visits in East Bengal up to 1911. Until 1947, the place was known as Governor House. The building was damaged by a storm in 1961 and was rebuilt. Construction of the new building was completed in 1964. The then Governor of East Pakistan used to reside in the building. 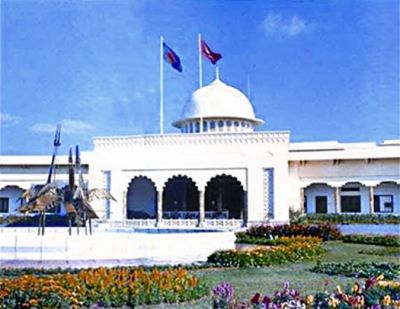 The Governor House was renamed as Bangabhaban on 12 January 1972 when Justice Abu Sayeed Choudhury became the first constitutional President of the country. It is still the official residence of the President of Bangladesh.

Bangabhaban has high boundary walls on all four sides. The main building is a three-storeyed palatial complex. All around this building are greenery strewn with trees. The floor-space of the ground floor is 6,700 sq metre. The President's residence is on the north-east corner, comprising two storeys. The President has two suites along with five well-furnished spacious bedrooms. The President's office, the office of the civil and military secretaries to the President, offices of other officials, and separate rooms for audience with local and foreign visitors are also located in the ground floor. In addition, there is a cabinet room, banquet hall, darbar hall, state dining hall, mini auditorium and a lounge for local visitors. In addition to the President's residence, there are five rooms for officials, a control room and a studio in the first floor. In the second floor, there are four suites for foreign heads of state and government.

The security office, post office, bank, canteen, tailoring shop, three-domed mosque and barracks of the President's Guard Regiment are located in the vicinity of the main gate of the Bangabhaban. The residential quarters for officers and staff of the President's office are located in three outlying areas of Bangabhaban. Besides, there are two bungalows one for the military secretary and the other for the assistant military secretary. The Bangabhaban has an open compound of 47 acres of land. [Helal Uddin Ahmed]