Bara Sharifpur Mosque is located on the eastern bank of a large tank called Nateswar Dighi in the village of Bara Sharifpur under Laksam thana of Comilla district. The mosque was declared protected in 1959 and some minor repair work was done to it in the early 1960s. The department of archaeology, Bangladesh did further restoration work, when proper care was taken to reproduce the original character in the ornamental panels. It is now in a good state of preservation.

Enclosed by a low outer wall with a renovated gateway in the east, the mosque proper forms an oblong rectangle, 14.48m by 5.94m on the outside, and strengthened by massive octagonal towers on the four exterior angles. 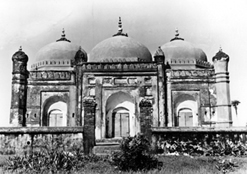 The mosque can be entered through arched doorways - three on the eastern facade and one each on the north and south sides, the latter two being closed with iron grilles. All the corner towers rise above the roof and are topped by cupolas having lotus and kalasa finials. The eastern doorways, opening out under half-domed vaults, have cuspings on their outer faces. The central doorway is bigger and set within a projected fronton with bordering octagonal turrets. Corresponding to the three eastern doorways there are three semi-octagonal mihrabs inside the qibla wall. Here also the central mihrab is larger, and shows an outward projection with ornamental turrets on either side.

Inside the mosque there are three conventional bays created by two wide transverse arches on engaged brick pillars - the central bay is square and the flanking bays are rectangular. All the three bays are covered with slightly bulbous domes, the central one being the largest. The domes are directly placed on octagonal drums and crowned with lotus and kalasa finials. The phase of transition for the support of these domes has been achieved by the same system as in some earlier buildings of its kind, such as the Lalbagh Fort Mosque and the satgumbad mosque at Dhaka.

The horizontal parapets and the octagonal drums below the domes are decorated with rows of blind merlons. The domes have basal leaf ornamentation on the inside, while their apices depict large medallions. The corner towers, divided into sections by moulded bands and the flanking turrets have beautiful kalasa bases. The eastern facade is richly embellished with sunken arched panels. All the mihrab arches have ornamental cuspings on their faces. The rectangular frame, which encloses the central mihrab, is topped with a frieze of blind merlons. Save these, the whole building is now internally plastered smooth and white washed.

In plan and other details the present building belongs to a very popular type of Mughal Mosque in Bengal, with a large central dome and a smaller one on either side.

Two Persian inscriptions - one over the central doorway and the other over the central mihrab of the mosque - record its construction in 1706-07 by Muhammad Hayat Abd Karim, who, according to local tradition, was a Kotwal of the area. The mosque is also called the 'Kotwali mosque'. [MA Bari]