Bara Sona Mosque is the largest mosque of Gaur-Lakhnauti, in the capital of Sultanate of Bengal, and it marks the culmination of Sultanate architecture in Bengal. In contrast to its namesake, the chhota sona mosque, perhaps the most perfect edifice of the kind in ornamentation, the Bara Sona is sombre. Also, being more than double in size, it has a majesty unmatched by any other mosque of the country.

The builder of this mosque is still unknown. The inscription dated 932 AH (1526 AD), which Major Franklin discovered near the mosque at the beginning of the last century, is often believed to refer to as that of the mosque itself, ie, it was built by Sultan Nasiruddin nusrat shah.

But the recent discovery of another inscription in the debris just outside the mosque to its northwest corner appears to negate the view. The latter inscription (now preserved in the Maldah State Museum) speaks of a gateway constructed by Nusrat Shah in 930 AH (1523 AD). Since this inscription was found close to the site and very near the mosque, the ruins must be of the grand gateway of the mosque.

It precedes the date of Franklin's inscription by two to three years, which seems almost impossibility, since the gate could not have been constructed prior to the building of the mosque itself, as the tradition is that the gateway of such an edifice is constructed after the completion of the main structure. Moreover, the style of the mosque is in mark contrast to that of the bagha mosque, built by Nusrat Shah, which is decorated in almost all its parts with terracotta ornaments in conformity with the Islamic concept of horror vacui. The Bara Sona is plain and almost devoid of ornamentation except perhaps the mihrabs, which being the most important part could be imagined to have been decorated profusely like all other mosques, but are now all not to be seen.

The Bara Sona has close resemblance in general appearance with the Chhota Sona built by a wali of Alauddin husain shah, perhaps during the early part of his reign. The similarity between the two mosques, and the contents of the recently discovered inscription which suggests a date of 1523 AD imply that the mosque in all probability was constructed during the last years of the reign of Alauddin Husain Shah, who during the later part of his reign founded a city named Buzurg Husaynabad to the north and northwest of the original city near Ramkeli. The city, probably unfinished, has now vanished, but could one of its symbols, the Jami Mosque, point to this mosque, built in conformity with the power and dignity of a sultan who was not only a king but also the Commander of the Faithful by 'deed and testimony'? 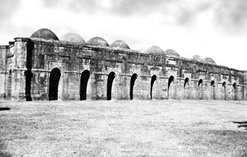 On stylistic ground the date of the dhakhil darwaza has also been attributed to this Sultan. The mosque is generally known as a Baraduari for having twelve doors. This is perhaps an expression of greatness in size. Abid Ali explains it in a different way by saying that ‘the name ‘Baraduari’, ordinarily meaning ‘an audience hall’, was given to the mosque on account of the spacious courtyard in front of the mosque’.

The mosque is a rectangular building; brick faced with stone, and measures 51.20m by 23.15m with the usual octagonal towers at the corners. In front there is a spacious veranda, running north south, with eleven pointed arched doorways in front, and one on each of the sides for entrance. The three aisles mosque is deep with three additional entrances on the north and south sides, having thus a total of forty-four domes built on pendentives carried by spacious rectangular columns. At present, only the domes of the veranda and the lateral walls of the mosque remain. On the northwest corner of the mosque, there was once a royal gallery covering an area of four bays with four domes above. Like all other mosques, the entrance to the gallery was from outside. The mihrabs of the mosque, corresponding to the eleven doorways, are now all dilapidated.

The mosque has two gateways, still surviving, to its east and north, making space for an open courtyard in front. The gateways are similar, having a vaulted passage through the middle, and correspond to a roof, curvilinear in form, to that of the main building.

The simplicity of the building has not been satisfactorily explained. But a comparison with larger monuments of the medieval period in the Indian subcontinent may offer a clue to its composition. It appears that in Indo-Muslim architecture 'beauty' and 'fineness' went in general with smaller creations. The larger the building, the greater was the simplicity. 'Majesty' and 'overwork' did not always go together, and the masons of the Bara Sona had clearly such a vision in mind. Moreover, if the mosque was the work of the later part of Husain Shah's reign, the impact of the simple life of an older person must also have inspired the design. [ABM Husain]