Administration Barguna Thana was established in the last part of the eighteenth century and it was upgraded into a Sub Division in 1969; it was turned into a district in 1984. 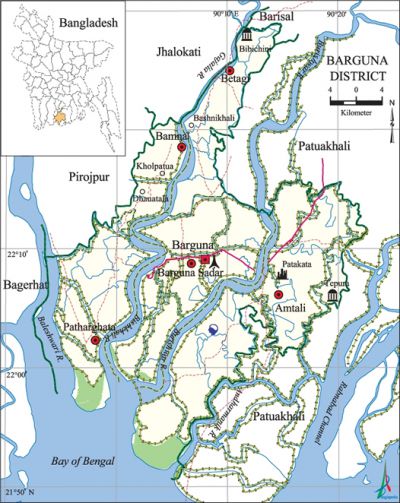 War of Liberation During the war of liberation, the Pak army killed more than one hundred prisoners of the Barguna district Jail and buried them in a mass grave on the west side of the Jail compound on 29 and 30 November 1971. Besides, the Pak army killed many people of the Barguna Town area; they also killed a number of freedom fighters while on retreat. Heavy damages to properties were caused when the Pak army set the eastern extremity of Betagi Bazar of Betagi upazila on fire. A number of Pak soldiers and rajakars were killed in a frontal encounter between the freedom fighters and the Pak army at Badnikhali Bazar of Bura Mazumdar union; besides, the motor launch MV Munir carrying the Pak army, was seriously damaged.