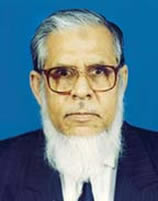 Bari, Muhammad Abdul (1930-2003) was a renowned educationist, oriental linguist and Islamic thinker. He was born in 1930 in the house of his maternal grandfather of the village Saidpur under Shibganj Police station of Bogra district. His ancestors were inhabitants of the village Nurul Huda of Dinajpur district. His father Muhammad Abdullahil Baqi was the Vice-president of muslim league in undivided India. He was a member of Central Council and Bengal Legislative Assembly, Pakistan General Assembly and East-Pakistan Legislative Council.

His primary education started at home and later he was admitted to a madrasah. His uncle Abdullahil Kafi was an eminent alim and President of Jamiat Ahl-i-Hadith. Being a son of such Islamic family Abdul Bari had no other alternative but to study in the Madrasah. From his boyhood Abdul Bari was a very meritorious student. He read upto class VI at the Nurul Huda Junior Madrasah and passed the final examination with credit. Then he got himself admitted into class VII of Naogaon Co-operative High Madrasah, and started staying in the house of his maternal uncle Maulana Abdus Salam, a teacher of the Madrasah. He passed the High Madrasah Examination in 1944 at the age of 13 years and 6 months with first division and placed in the eleventh position among the successful candidates in the undivided Bengal.

Then he was admitted in the Dhaka Intermediate Govt. College (Now Kazi Nazrul Islam College) and in 1946 he passed the Islamic Intermediate Examination in First Division topped the First position among the successful candidates. Afterwards he got admitted in Dhaka University to study Arabic. He did his Honours and Master's degrees in 1949 and 1950 respectively and became First class first in both the examinations. As a mark of credit he received the Nilkanta Sarkar gold medal, the Bahrul Ulum Ubaidi Suhrawardi gold medal and the dhaka university gold medal. After the completion of Master's degree he proceeded to UK for higher study as he obtained the scholarship of Central Government of Pakistan from the Oxford University for his research under two eminent on Muslim reform movements of Bengal in the nineteenth century orientalists professor HAR Gibb and professor Joseph Schatch. He obtained the DPhil degree in 1953.

On his back home with doctoral degree from Oxford University he entered into teaching profession. He remained in teaching from 1954 to 1977 and served as an academic plus administrative position from 1977 to 1996. He joined the University of Rajshahi as Reader (Now Associate Professor) of Islamic History in the Department of History in October 1956. Dr. Itrat Husain Juberi, the first Vice-Chancellor of Rajshahi University separated the Department of Islamic History and Culture. He appointed Dr. M A Bari as the Head of this newly created Department. His scholarly approach and administrative capability enhanced the fame of this Department, and for the appointment of bright teachers, the students coming out of this Department proved competent to keep ablaze the rays of learning at home and abroad. In recognition of his best performance in the professional job he was awarded the president';s gold medal as the outstanding teacher of rajshahi university in 1969. Availing of the Nafild Fellowship he completed the post-doctoral research in the University of London in 1961. He had been Dean of the Faculty of Arts of the Rajshahi University from 1962-1963 and the Provost of the Jinnah Hall (now Sher-i-Bangla Hall) from 1969-1971.

Dr. M A Bari participated in seminars, symposia and international conferences held in seventeen countries of Asia, Africa, Europe and Latin America. Dr. MA Bari became the President of Jamiat-i-Ahl Hadith in 1960 following the death of his uncle Maulana Abdullahil Kafi till his own death on 4 June 2003. [AKM Yaqub Ali]