Bashar, Air Vice Marshal M Khademul (1935-1976) chief of Bangladesh Air Force. Born in Bogra on 1 September 1935, Khademul Bashar passed Matriculation examination from Satkhira Prananath High School and ISc from Rajshahi College. He joined the flying branch of Pakistan Air Force (PAF) as a cadet in 1953. Having obtained his graduation from the Military Academy, Khademul Bashar joined the Fighter squadron. In 1960, he was transfered to the newly established Bombing squadron of PAF. He was in command of a Bombing squadron in 1969-70, and was then the only Bangali holding such position. Khademul Bashar was honoured with Flying Proficiency Badge in 1969, and was invested with the insignia of TBT for his extraordinary performance in the Air Force. He was promoted to the rank of Wing Commander in 1970, and was in command of a Radar squadron in Dhaka. 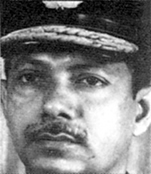 Khademul Bashar joined the war of liberation in 1971, and though an officer of the Air Force he was deputed to command the land force in the districts of Rangpur and Dinajpur (Sector 6). After the liberation he was appointed as Brigade Commander in Rangpur, and was promoted to the rank of Group Captain in February 1972. He returned to the Bangladesh Air Force (BAF) service in July 1972, and was posted as Lieutenant in BAF Dhaka Base.

Khademul Bashar had outstanding contribution to the formation of the Bangladesh Air Force in 1971, and had vital role in rebuilding the Force after liberation. He was invested with the insignia of 'Bir Uttam' for his valour in the War of Liberation.

Khademul Bashar died on 1 September 1976 in a plane crash while himself piloting an inaugural flight on the occasion of the opening of Flying Instructors School at BAF Dhaka Base. Dhaka Base was subsequently renamed after him as BAF Bashar Base. [FM Mostafizur Rahman]