Bat (badur) a mammal having wings and capable of flying. Bats belong to the order Chiroptera, suborder, Megachiroptera (larger bats), and Microchiroptera (smaller bats). The species of Megachiroptera are basically fruit eaters, hence called fruit bats, and Badur or Kola Badur in Bengali, and the microchiropterans are insectivorous and called insect bats and Chamchika in Bengali. Some fruit bats are, however, smaller in size than several insectivorous bats.

Chiroptera contains about 800 species that is second only to the rodents. They live in crevices, tree hollows, furrows in rocks and walls, caves, abandoned buildings, under the bridges and road culverts, large trees and old wells. Under each roosting place there will usually be a pile of droppings that stink. The same roost is used for ages' unless disturbed.

Bats have a keen sense of smell and sound. All fruit bats but the Egyptian Fruit Bat Rousettus aegyptiacus use the sense of smell and vision for locating food and shelter while all the insect bats and the Egyptian Fruit Bat use echolocation. The nose of many species has become modified and works as a sensory organ. Echolocation is a remarkable phenomenon in the animal world. Other than bats the marine mammals are known to use echolocation for communication. Insect bats have a perfect mechanism of echolocation.

The insect bats produce high frequency, supersonic sound waves through the mouth or the nostrils. The Egyptian Fruit Bat produces the sound with the help of the tongue. These sound waves hit objects such as the prey or obstacles and will rebound as echoes that are picked up by the bat ears. Insect bats have an acute sense of hearing.

When resting the bats hang upside down and remain suspended from the substratum with the help of the claws of the hind feet. While searching for food in the fruit trees the claws of the fingers help the bats in clambering on the branches. While resting, the wings are kept folded against the body or envelop it. All bats are nocturnal or crepuscular. However, some fruit bats can easily move by daytime.

It is now known that these bats can send out signal cries at the rate of 10 per second before leaving the roost. This rate increases to 30 per second when they are airborne and could rise up to 50 per second as 'warning echoes' while detecting a prey or danger. It is believed that 'the time between the emission of the call, the reception of the rebound echo and the bat's physical reaction to the stimulus may in fact be as little as one hundredth of a second.

Bats feed on fruits and fruit juice, insects, spiders, fish, frogs, small reptiles and birds, small bats and other smaller mammals. Vampire bats from the Americas drink blood from the body of warm-blooded animals. Bangladesh bats do not hibernate or aestivate. 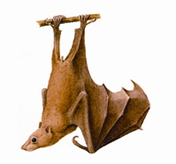 The gestation period is from 3 to 5 months and babies are usually born at the end of winter or the beginning of summer. One baby per litter is the rule and a female raises only one litter each year. Baby bats are born blind and usually naked but some are covered with a double layer of short and fine silky hairs. Soon after birth a baby crawls up the mother’s body till it reaches one of the two pectoral nipples; it will hold on to the nipple till the time of weaning. All baby teeth are of the same size and used just for getting a good grip on to a teat. Babies cling to the mother for 2-3 months before they reach the adulthood.

One-fourth of Bangladesh's 113 species of mammals are bats. The most common and widely distributed large bat in Bangladesh is the Flying Fox or Greater Fruit Bat (Badur or Kola Badur), Pteropus giganteus. It is the largest flying mammal, with a wingspan of 1.5 m or 5 feet, head and body 40 cm and no tail, roosts in a colony of a dozen to over one thousand bats in the Banyan, Fig, debdaru, mango, bamboo, Satim, Rain Tree, Richard's Koroi, coconut, betel nut, Date Palm and Palmyra Palm trees; feeds on mango, litchi, guava, banana and sapota. The Fulvous Fruit Bat (Lalchey Kolabadur), Rousettes leschenaulti is another widely distributed but uncommon bat. The False Vampire Bat (Daini Badur), Megaderma lyra is possibly the largest of the insect bats in the country; head and body 9 cm, tail is absent; feeds on small vertebrates and insects, and is the most common bat after sundown.

Indian Pipistrelle (Chamchika), Pipistrellus coromandra is not only the smallest bat but also the smallest mammal of Bangladesh, measuring only 4.5 cm in head and body with a tail of 3.5 cm. It is also the most common and widespread mammal in the country.

Although the fruit bats cause occasional damage to fruits they are largely responsible for the cross-pollination and seed dispersal of wild plants, and control insect pests. In the forest fruit bats are an efficient propagator of many species of soft and fleshy fruit trees. Some ethnic people eat fruit bats. Some species are the carriers or vectors of the Rabies virus but do not become rabid. A man receiving a bite from a bat must be administered with an anti-rabies vaccine. [Ali Reza Khan]