Bathan (cattle colony) a nearly extinct agrarian institution for community herding of the cattle of the village. Literally bathan, a prakrit word, means cowshed or a place where cattle is housed and maintained. The word appears in ancient and medieval texts when goala/gop or milk caste and gods and goddesses pertaining to these castes are referred to. As a legend goes, goddess manasa once landed in a bathan in guise of a stranger and sought, as a test, protection from a bathan goala. Such a legend indicates high antiquity of bathan as a mode of rural living and organisation in ancient times. Institutionally, bathan is a form of agrarian business pursued by professional rakhals or cattle minders who keep his and other people's cattle under his care for grazing on community land. This institution flourished at a time when livestock constituted a crucial factor in rural economy and social relations. A catetory of people called rakhal or bathania used to maintain cattle of the village community in the field and in return received remuneration from the community in kind. crops and livestock were common medium of exchange between rakhals and husbandmen. 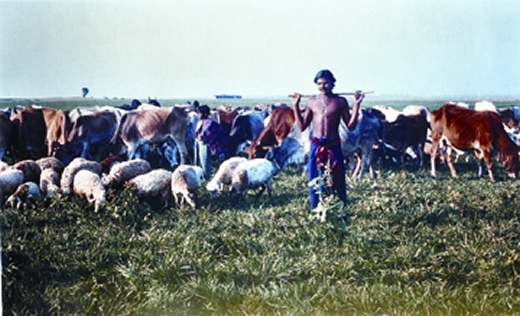 In olden times, bathan was common to all places of Bengal wherever a rural settlement emerged. One who was unable to tend his cattle by himself or herself surrendered their cattle to a bathan establishment where it grew under the care of its custodian, bathania. With the growth of population and practice of intensive cultivation and consequent scarcity of grazing grounds, the bathan institution has been shrinking from early nineteenth century. The khas or public land was normally used as sites of bathans. But as the quantity of khas land diminished over time, the system of maintaining cattle on khas land as a mode of production also declined. Bathan, however, is still noticeable in some zones in Bangladesh, such as, haor basin, newly formed chars and offshore islands. In Sylhet, Habiganj, Netrokona and Kishoreganj, temporary bathan settlements are formed in the winter in the haor beds. The settlements are dismantled when the monsoon comes. The cattle of the haor villages where fodder is scarce or absent during monsoon is usually transported to new bathans established in the hilly areas where grasses and leaves grow in the rainy season. There are also some bathans in chalan beel areas of Pabna and Sirajganj district. Most present milk product industries are now located near bathans or modern dairy farms. [Sirajul Islam]