Bead is considered to be one of the earliest ornaments used by men and women. From the prehistoric period people have used easily available raw materials like stones, shells, bones, teeth and seeds to make beads. They used to pierce and string the beads to prepare necklaces. Like prehistoric men, present day tribal people also use marine shells, first and second phalanges of the small ruminants, canines and incisors of carnivores, and antlers of deer to make beads. Besides being used as ornaments, beads carry religious, medicinal and talismanic significance. Wari-Bateswar (Wari-Bateshvar) people use semi-precious stone beads as rosary; they also take bead-washed water as medicine in the belief that it cures diseases. Beads found at graves in Tamilnadu and Malabar Coast was assumed by HC Beck to be passage money for the dead. The occurrence of a large number of crystal beads in many archaeological sites was, according to Rivert-Carnac, due to their sacredness in the eyes of Indo-Aryans, Buddhists or Hindus. 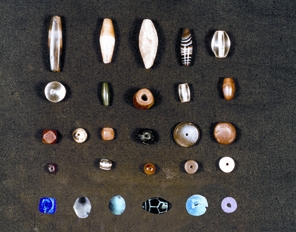 The earliest beads in the subcontinent are reported from Upper Palaeolithic culture, while we find the earliest beads in Bengal (pandu rajar dhibi, mahisdal, Bharatpur, Hatigara and mangalkot) from Chalcolithic culture. Most early historic and early medieval archaeological sites such as mahasthan, wari-bateswar, paharpur and mainamati in Bangladesh and Pandu Rajar Dhibi, Mangalkot, Mahisdal, Bharatpur, chandraketugarh, Tamluk, Harinarayanpur, Deulpota, and Bangarh in West Bengal have yielded a wide variety of beads. There is no firm evidence to prove that Palaeolithic, Mesolithic and Neolithic people of Bengal were using beads as ornament.

Among the total assemblage of beads, the semi-precious stone ones are dominant in number, shapes and designs. Materials include agate, crystal, carnelian, chalcedony, onyx, garnet, jasper, marble, chert, amethyst and rarely lapis lazuli. Banded agate is the most common and then carnelian, rock crystal and chalcedony. Delicate polish can be observed on the majority of the beads, showing the dexterity of the artists. 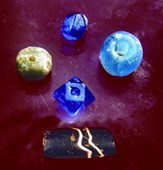 Beads in Bengal are either plain or etched. The common shapes of plain beads during the early historic period were disc, spherical, cylinder, long barrel, barrel, hexagonal, truncated bicone, cornerless cube, truncated convex bicone, convex bicone, pentagonal, triangular, square, long barrel hexagonal, fluted, oblate, annular, lenticular, diamond shape, trapezoid, mealon, oval, elliptical and diamond. Among them disc, spherical, cylinder and long barrel shapes are predominant in Bengal beads assemblage. On the other hand, a majority of the disc and cylinder shape beads were made of black and white-banded agate. Bead makers chose stone with one band for the disc shape and stone with two bands for the cylinder shape. In all probability, they selected this material due to their natural banding. Bead features suggest that bead makers exhibited a keen sense in selecting materials and shapes.

In addition to the large number of plain beads, a few etched beads made of carnelian and agates have also been found in Bengal. These beads are of spherical and long barrel shapes and decorated with different patterns. Some of them are identical to Taxila, marginal Kausambi, and Raighat etched beads. The similarity of the etched beads of the region implies Bengal’s contact with countries outside her boundary.

Glass beads are quite common, and are made in a wide variety of techniques and shapes. Gold-foil glass beads are found in Mahasthan, Chandraketugarh, Harinarayanpur and Deulpota. Such beads have also been reported in a very limited number from several other sites in the subcontinent. Peter Francis Jr. argues for the Egyptian origin of gold-foil glass beads during early historic times. Mahasthangarh has also yielded sandwiched glass beads of Middle East origin during the Early Historic period. Several opaque brown and opaque orange red glass beads, which Peter Francis called Indo Pacific Monochrome Glass Beads, have been found at Mahasthangarh, Wari-Bateswar, Chandraketugarh, Harinarayanpur, Deulpota, mangalkot and Tamluk. 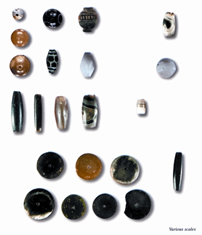 They reveal Bengal's contact with Arikamedu and Southeast Asia in ancient times. Indo Pacific Monochrome Glass Beads were manufactured at Arikamedu from 3rd century BC to 1st century AD and later in Southeast Asian countries like Sri Lanka and Vietnam. The discovery of green glass balls at Chandraketagarh suggests the existence of a local glass bead-manufacturing centre.

Besides semi-precious stone and glass beads, abundant terracotta beads, represented by common shapes such as aricanut, barrel, cylinder and ghata, and a few copper, faience, steatite, coral (?) and shell beads have been discovered from limited sites in Bengal.

The recent discovery of cores, flakes and unfinished beads of crystal, agate, amethyst, jasper and marble reveal that the Mahasthangarh region was a stone bead-manufacturing centre.

The raw materials for the beads might have come from Chhotanagpur Plateau and Peninsular India. Semi-precious stone beads could also have been imported from well-established bead-making centres like Ujjain, Kausambi, Ahichchhatra, Paithan, Ter, Kondapur, Jaugala, Cambay and Bharhut. It is not without significance that the appearance of a large number of semi-precious stone and glass beads coincides with the emergence of urbanization and political entities in Bengal between the Early Historic and Early Medieval periods. It may be inferred that the beads were imported as well as locally manufactured to cater to the demands and taste of steadily growing and prosperous ruling class, priests and traders. [Seema Pawankar and SS Mustafizur Rahman]