Beanibazar Upazila (sylhet district) area 253.22 sq km, located in between 24°45' and 24°57' north latitudes and in between 92°03' and 92°15' east longitudes. It is bounded by kanaighat and zakiganj upazilas on the north, barlekha on the south, Zakiganj upazila and assam (India) on the east, golapganj upazila on the west. The upazila has 12.01 km long international boundary with India. Total forest area is 15.54 sq km; Tilas (hillocks) 170.

Administration Beanibazar' Thana was formed in 1938 and it was turned into an upazila in 1983.' 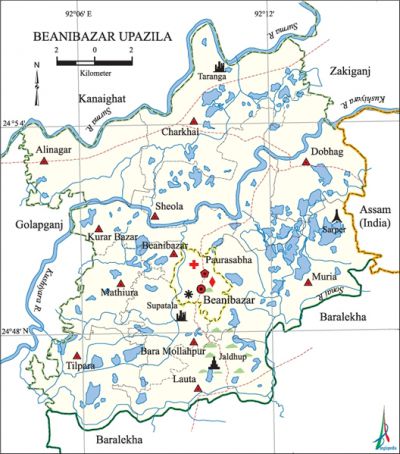 History of the War of Liberation During the war of liberation the Pak army used to capture innocent persons from different places of the upazila and killed them at mass killing sites atthe backyard of the Dak bungalow of the thana sadar, thana compound and the present Shahid Tila area.

Marks of the War of Liberation Mass killing site 4 (backyard of the Dak bungalow, Thana Compound, Shahid Tila and Sarpar Camp); mass grave at C&B road. 'After the war of liberation a memorial monument has been constructed here; this place is popularly known as Shahid Tila.