Bee-eater (suichora) slim birds with narrow and pointed, downwardly curved bills, and proportionately long tail, the central feathers of which are elongated in many species. These birds belong to the family Meropidae, order Coraciiformes, occurring in the Old World and Australia. The plumage is usually brilliant blues and greens contrasted with reds and yellows. 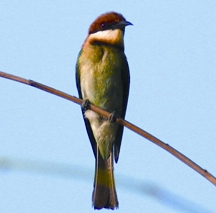 Being specialist predators of stinging insects like bees, wasps, ants etc, they have developed an effective technique for devenoming their prey. A captured insect is struck repeatedly against the perch, and then rubbed rapidly against the perch while the bird closes its bill tightly to expel the venom and sting. They catch insects nearly always on the wing. They make nests in groups of two or three, in loose aggregations spaced regularly or irregularly along a bank, or in large colonies.

Incubation is shared by the sexes and both parents feed the chicks, which leave the nest 24 to 30 days after hatching. In some group-living species, there are helpers at the nest, which increases the rate of fledging success. About 27 species occur in the Old World. Bangladesh has 4 species of bee-eaters. Bee-eaters of Bangladesh (Aves, Coraciiformes: Meropidae):

Merops leschenaulti Chestnut-headed Bee-eater: smaller than a bulbul. Head and upper back are bright chestnut. Chin and throat are yellow. Central pin feathers projecting only slightly beyond tail. Sexes are alike. Lives in small flocks and are seen on exposed branches of trees in wooded country. Also found in India, Sri Lanka and Myanmar. Local name: Suichora; Distribution: Hills.

Nyctyornis athertoni Blue-bearded Bee-eater: larger than other bee-eaters that occur in the country;  it is about the size of a pigeon, but slimmer. Bill is black. Forehead is grass- green. The feathers at the middle of the throat and upper breast are light blue, lengthened into a beard conspicuous in profile while calling. Underparts reddish buff broadly streaked with green. Tail is square without projecting pinfeathers. Usually seen in pairs in secondary forests. Feeds usually on insects, occasionally honey from flowers. Also found in India and Sri Lanka. Local name: Baro Suichora/ Pahari Suichora; Distribution: Mixed evergreen forest. [Md. Anwarul Islam]