Bhadughar Mosque is located in village Bhadughar, about 3 km due south of the Brahmanbaria district headquarters. Thoroughly repaired in the recent past, extensions have been made on the north, south and east sides. A new minaret has been added in the southwest corner of the extended part of the mosque. 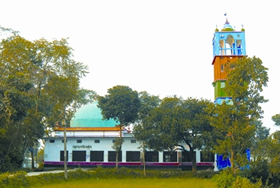 Built entirely of brick and plaster, the mosque is square in plan (6.58m a side inside) with octagonal towers on the four exterior angles. All the towers rise high above the parapet and terminate in kiosks and cupolas, now renovated. There are three arched doorways in the eastern facade and only one on each of the north and south walls. In the eastern facade the central doorway is bigger than its flanking counterparts. The western wall inside is recessed with three mihrab niches, of which the central one is bigger and projected outside, with bordering turrets. The central doorway in the east was also originally projected with flanking ornamental turrets, traces of which still remain.

The square prayer chamber is covered with a big hemispherical dome on a circular drum. The dome is crowned with a crudely made lotus and kalasa finial. The four blocked arches, one in each wall, and the four half-domed squinches on the corners carry the dome. The triangular spaces between the blocked arches and squinches are filled with sultanate style Bengali pendentives formed of oversailing courses of bricks. The parapets and the cornices of the building are horizontal in the usual Mughal fashion.

The whole building is now externally plastered and whitewashed, but traces of original sunken rectangular and square panels still exist. The rectangular frame of the central mihrab is ornamented with floral scrolls of recent origin. The apex of the dome is embossed with a tiered rosette in stucco.

A Persian inscription, still fixed over the central doorway, records its construction by one Noor Muhammad in 1673 AD during the reign of Emperor aurangzeb. This mosque is perhaps the earliest known single-domed building in Bengal, and is marked with projected frontons having ornamental turrets. This is one of the distinguishing features of Mughal architecture that appeared for the first time in Bangladesh in the three-domed khandakartala mosque (1632) at Sherpur in Bogra. [MA Bari]