Bharat Bhayna is an archaeological site in south-western Bangladesh. Located on the western bank of the Buri-Bhadra river in the village of Bharat Bhayna in Keshabpur Upazila of Jessore. It is 20 km southwest of Daulatpur and 18 km southeast of Keshabpur. The mound raises 12.20m above the surrounding field and appears like a hillock in the plain land. According to the local inhabitants it was much higher before the earthquake of 1897.

The circumference at the base of the fairly conical mound is about 250m. It is reported that a modem temple was built close to this mound by removing large quantities of bricks from the latter. Some deep, irregular trenches near the crest testify to the vandalism. 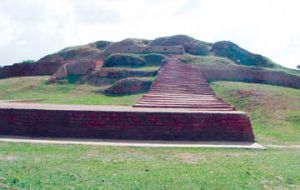 In 1922, Archaeological Survey of India protected the mound. kn dikshit, who surveyed it, suggested that the mound covered an ancient Buddhist temple of the 5th century AD and probably was one of the 30 sangharamas of samatata mentioned by hiuen-tsang. The mound has been disturbed by brick-hunters several times in the past. Recently the landowners leveled a considerable portion of the slopes of the mound for the extension of their cultivable land. Satish Chandra Mitra mentions that there was a garkhai (moat) probably intended for the protection of the monument. The present topography of the surroundings of the mound, however, clearly precludes any possibility of its ever being a sangharama encircled by a moat as surmised by KN Dikshit and SC Mitra.

The supposed ancient temple is said to have been built by a mythical king named Bharat. Remains of another ancient site locally known as Bharat Rajar Badi (house of king Bharat) are located on the river Buri-Bhadra in the village of Gaurighona about 2 km south of this mound. Another mound known as Dalijhara is located in the adjacent village of Kashimpur. Local legends describe it as the residence of an official of that king.

The Department of Archaeology of Bangladesh first excavated the mound in 1985. The work was resumed after a decade in the 1995-96 season, and since then excavations have been going on every season upto 2000-2001 except 1996-97. The excavation work is not yet complete.

The excavations have partly exposed the remains of a building whose superstructure seems to have been completely destroyed. The surviving part seems to be the foundation or high podium of an imposing superstructure that does not exist now. The foundational part appears to be cruciform in shape. This foundation consists of a series of blind cells of various sizes and shapes (square, rectangular with projection in one or two sides). The main building, either a shrine or a stupa, was built 11.88m above the ground level on a solid foundation gradually raised by means of a number of cross walls of various dimensions and oriented in different directions (north-south and east-west) forming a cellular structure. The intervening spaces of the cross walls were compacted by earth filling resulting in a series of blind cells.

A number of these blind cells have been exposed. It appears that the principal cell or room of the main building was built over the massive square central block of the cellular structure, located in the middle of the mound. The central block externally measures 11.30 ' 11.30m and consists of four blind cells. The walls of these cells are very thick (2.80m) in comparison to other parts of the cellular foundation. Around this central block three more rows of blind cells were accommodated which gives a rectangular shape. This large rectangular block measures from east to west is 47.10m and from north to south is 42.10m. In the middle of each side of the rectangular block of blind cells a projected arm, consisting of probably 3 to 4 blind cells, was provided. This gave the rectangular block a somewhat cruciform shape. A 3m wide circumambulatory passage ran parallel to this cruciform structure at its base. The bricks used in the structure are very large measuring 34 x 22.5 x 5.5cm and 35 x 23 x 6cm.

Besides the architectural remains, only a few antiquities including one terracotta human head of Gupta era, fragments of some terracotta figurines have been registered, a few earthen oil lamps, some fragmented ornamental bricks, two pieces of bricks with foot print and an earthen miniature pot apart from these are worth noted.

Of these few antiquities, fragments of two terracotta plaques deserve special mention due to their huge dimension. One represents probably a female figurine along with her counterpart on her proper right and a drummer on her left. Only lower portion of legs of the main figurines and from leg to neck of drummer survive. The size of the existing portion' (55 ' 40cm) of the main figurines indicates most probably the entire plaque was around 1.40 m tall and 96 cm wide. The other terracotta fragment represents the middle part of a standing male figure (probably) wearing decorated clothes. The fragmented portion measures 34 ' 27cm. It indicates that the complete plaque might be around 1.5m tall. So it can be surmised that both the plaques recovered from Bharat Bhayna are the largest plaques had ever been founded not only in of Bangladesh but also in Eastern India. Since the major portion of both the plaques is missing other features of these figurines could not be examined.

The recovered shreds are parts of neck, rim and base of various household objects such as pitcher, bowl, saucer, lid, oil lamp, sprinkler's top etc. The shreds are of various colours and textures, mostly pale reddish with a few deep ash and buff coloured. Almost all of them are thick textured; only a few are medium textured. A few shreds contain some designs: herringbone, parallel lines, net etc. [Md Shafiqul Alam]