Bhasu Vihara locally known as Narapatir Dhap, is a complex of two rectangular monasteries and a semi-cruciform shrine of the Post-Gupta period. It is located at about 6 km west of mahasthangarh (Mahasthangad) on the northern part of village Bihar, under Bihar union of Shibganj upazila in Bogra district, about 500m west of the Nagar river. Three mounds have been excavated here revealing the basal parts of two monasteries and one shrine. 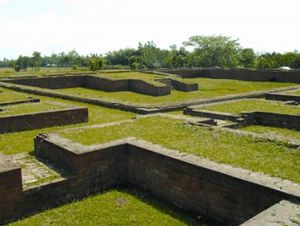 Monastery 1 Built of burnt bricks set in mud mortar, this was roughly rectangular in plan, measuring 148.13m (north-south) by 139m (east-west). Twenty-six monastic cells, each measuring roughly 11m by 10m, were arranged on the four sides of a square courtyard. The gateway complex, set in the middle of the east wing, presented an imposing facade. A pillared entrance hall with an open front porch gives access to an inner hall that was placed in the same alignment as the cells. Two guardrooms flanked the outer hall.

Monastery 2 lies to the northeast of Monastery 1 and was broadly similar in plan. Monastic cells are set at the back of a veranda around an open courtyard, access to which was provided by a single gateway. This monastery had 30 cells arranged in the following fashion: 7 each in the east and west wings; 8 in the north wing, excluding a larger hall in the centre; and 8 in the south wing, excluding the inner entrance hall. The gateway was projected from the middle of the south wing, as the shrine of the monastic complex lay in that direction, and on the north and west there was a deep depression marking possibly a river bed or swamp. Otherwise, an eastern entrance is the regular feature of the Buddhist monasteries in Bengal. The outer entrance hall of the gateway had two massive brick pillars in the middle and two flanking guardrooms.

The Central Shrine The main shrine of this Buddhist complex lay in the south-eastern part of the mound, south of the monastery 2 and to the south-east of monastery 1. It was a semi-cruciform shrine with terraced ambulatory passages. It was entered from the west. The assembly hall or the mandapa was in the centre of the shrine. There were three ambulatory passages at three heights. At the level of the lowermost terrace the outer facade of the shrine was decorated with bas-reliefs made of terracotta plaques.

Apart from the structural remains of these monasteries and the temple, the excavations (1973-74, 1998) yielded Bronze images, terracotta plaques, decorated bricks and inscribed terracotta sealing, apart from the usual range of minor antiquities including pottery. More than 60 bronze images have been recovered, mostly from inside the cells. Although belonging to the late occupational level of the site, some of them could have been fashioned earlier and preserved in the monastery. All the images are said to have had back slabs and high pedestals. They represent the Buddha or Dhyani Buddha, Bodhisattva and Bodhishaktis. The images of Aksobhya are said to be more numerous among the Dhyani Buddha figures. In the range of the Bodhisattva figures, Avalokiteshvara is more common and the images of the different varieties of Tara dominate the range of female figures. No large, life-like bronze image has been found, but a large and inscribed pedestal suggests that such figures existed. Some images are inscribed and all of them have one or two inscribed sealings attached to the back of the back-slab. It has been observed that the elongated slim body, thin waist, broad chest and graceful developed features recall the classical Pala art, somewhat different from those of Mainamati which are characterised by more squat body and simple to crude style.

Human figures, animals and birds, and various geometric and floral compositions dominate the basic themes of the terracotta plaques. A large number of ornamental bricks, which were used to decorate the outer wall of the shrine along with terracotta plaques, have been obtained. The common designs are the lotus petal, stepped pyramid, dental edge, wavy lines, floral and chain motifs; the most common designs are lotus petal and stepped pyramid as we find at mainamati, paharpur and other Buddhist sites. More than 250 inscribed terracotta sealings, out of which more than a hundred are decipherable, have been obtained in excavations.

cunningham identified this monastery with the Po-Shi-Po mentioned by hiuen-tsang, the 7th century Chinese pilgrim who found no less than 700 monks inhabiting the place. Some scholars disagree on the ground that it is not possible to accommodate 700 monks mentioned by Hiuen-Tsang in 56 cells found at Bhasu Vihara. But it should be remembered that the excavations at Bhasu Vihara have been limited only to the upper levels, dated to the tenth-eleventh century AD and have not at all reached the seventh century levels of Hiuen-Tsang. So the identification of Hiuen-Tsang's Po-Shi-Po monastery with Bhasu Vihara is by no means archaeologically evident yet. [SS Mostafizur Rahman]