Bholahat Upazila (nawabganj district) area 123.52 sq km, located in between 24°48' and 24°58' north latitudes and in between 88°08' and 88°16' east longitudes. It is bounded by west bengal on the north, east and west, shibganj (Nawabganj) and gomastapur upazilas on the south.

Administration Bholahat Thana was formed in 1918 and it was turned into an upazila in 1984. 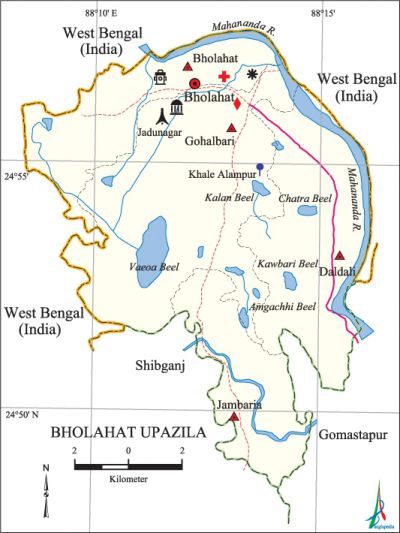 Historical events Two Deva statues of Gupta period and copperplate inscriptions on land grant by Dharma Pal was found in this upazila. In November of 1893 then District Magistrate of Maldaha, Umesh Chandra Batball discovered the inscription from Mori Beoa of village Khalimpur of the upazila. An encounter was held between the freedom fighters and the Pak army on 16 October 1971 in which one freedom fighter was killed. The Pak army conducted mass killing and plundering on 9 November at village Jambaria of this upazila.