Bihar Dhap an archaeological site located in Shivganj upazila of Bogra district. A village called Bihar belongs to the union of same name in Bogra district is popularly known as the home of Totaram Pundit. A tributary of the river Karotoa named Nagar flows encircling the village from three sides-east, west and south. The distance of Bihar Dhap from the bank of Nagar is 800m to the west and 600m to the north. It is about four-kilometre south-west of another famous archaeological site, mahasthangarh. hiuen-tsang during his tour from 638 AD to 645 AD in this part of Bengal mentioned the existence of a monastery named Po-Chi-Po Bihar, 6 km west of Mahasthangarh. Later in 1879-80, alexandar cunningham visited the site and identified Bihar Dhap as the Po-Chi-Po Bihar, described by Hiuen Tsang but the identification is still a questionable issue. 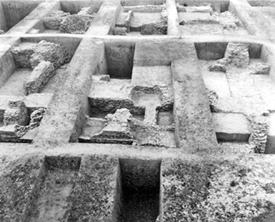 Earlier, the area of hillock-shaped archaeological site of Bihar Dhap was measured as 250m long from east to west and 220m from north to south with an average height of 2m. Two Buddhist monasteries constructed side by side were discovered in the west part after a series of excavations from 1979 to 1986. Another structure of a temple was also revealed partially in the eastern part. Later in 2005 ruins of another temple was unearthed beside the temple discovered earlier. It was found that the entry gate of both the temples was constructed on the north side.

The Vihara A monastery measuring 57m long from north to south and 61m from east to west was discovered in Bihar Dhap following the excavation during 1979-86. It has 39 rooms for monks, built around an open yard in the centre. The north and south wings have ten rooms each. Whereas there are 9 rooms in the west and 8 rooms in the east wing. An archway on an area of 20.8 6.4 m to enter into the monastery is located on the west. Remains of two guardrooms of 6.33 5.9 m each were traced outside the archway. The thicknesses of wall of the rooms were from 2m to 2.6m. The lone existing doors width is 1.4m; altars for placing statues were found in two rooms. There is a straight 2.7m wide balcony in front of the rooms. However, a brick-platform measuring 2.3m' 1.33m was discovered intact in the western part of the southern wing. Excavation of 5 rooms of 6.2m' 3.6m each has been completed. An altar of 2.2 sq.m has been found in one of these rooms. The thickness of the back wall, front wall and partition wall is 2.5, 1.8 and 1.2m respectively. Behind this completely unearthed monastery was possibly built later a monastery in the same site.

Specimens of the architectural structures of five different ages were found in the ruins here following an excavation of 22.34m on the eastern side of the south-east corner of the monastery. It is believed to be the remains of another monastery.

Temple-1 The temple is 5 metre long from east to west and about 6m from north to south. It had the mains entrance, with six steps on the north. Size of each steps or dhap was 24 cm wide, 27 cm high and 170 cm long. The temple was rebuilt for the second time as the first one was destroyed. At the same time a new temple was constructed on the west side linking it with the old one. As a result, the site was developed as a complex. Terracotta plaques were used for the decoration of wall of the temple during the first phase of construction. It remained absent during the reconstruction. However, smooth bricks were used to decorate the wall, 14 cm wide and 15 cm thick with engraved design. During the third phase of construction, a plaster of 2 cm thickness was put on the wall. The plaster, known as Bajralep- made of brick powder and clay, is a unique architectural feature which has not been discovered so far in any ancient temple of Bangladesh. Temple number one bears evidence of three different construction ages.

Temple-2 It was built during the second phase with the reconstruction of the damaged temple on the west side. The west wall of temple number one and the east wall of the temple number two temples was a common wall of both the temples. The complete design of the temple could not be revealed, as the excavation has not yet been completed. So far an area of 12m from east to west and 9.5m from north-south has been unearthed revealing the entrance, the walkway and the floor of the temple. The temples entrance, walkway and the floor were unearthed in original form, but rest of the parts was damaged. There is a compound in front of the temple and an altar in between the compound and the temple spreading its 52cm width wings toward east, west and north direction. The floor of altar and the walkway were carpeted with brick, brickbats and clayey soil. The front wall of one of the temple was decorated with two columns of terracotta plaques and the entrance of the temple has ten steps.

Various types of archaeological objects were discovered from Bihar Dhap. Of which most remarkable are, a silver coin of Sultan Sikandar Shah (1358-1390), 60 terracotta plaques illustrated with paintings, seal made of burnt clay, 100 designed bricks, lamps and globes made of brunt clay, small pearl-shaped balls of glass and burnt clay, toys, objects made of bronze, chalk and iron nails.

Through a series of review of the architectural structure and analytical studies of characteristics of relevant archaeological objects constructed in the first phase, its period has been identified as the 4th or the 5th century AD. The second and third phases of construction have been earmarked from the sixth to the tenth century. In the architecture of the fourth and the fifth phase of construction, old tricks were used in most of the cases. [Mokammal H Bhuiyan]