Blow-Out blowing up and destruction of a drilling rig due to uncontrolled flow of fluid (gas or liquid) from underneath the earth's surface during exploration or development drilling. Such accidents are accompanied, in most cases, by fire and leads to damage of property and often loss of lives. The chances of a blow-out in an exploratory well are greater than in a development well because the former has more unknown geologic conditions in the subsurface.

A blow-out may be caused when a drilling pipe encounters a shallow or a deep pressurised gas zone or an over-pressured rock layer in the subsurface without being prepared to counter the pressure. 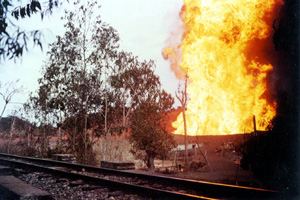 This allows the gas or the fluid from the rock layer to enter the drilling pipe and up towards the surface. The initial sign of a blow-out may be forceful kicks at the drilling rig floor, gas bubble in the circulating mud flow line system and increase of volume of returning mud as seen in the mud pit.

The most effective way to handle an imminent blow-out is to shut down the well by closing the blow-out preventer (BOP). An alternative way is to increase the weight of circulating mud to balance the subsurface fluid pressure, should there be enough early warning and time to activate the procedure.

Blow-outs in petroleum exploration are not rare. In Bangladesh there have been some blow-outs in its 90 years of exploration history. The earliest blow-out took place in 1955 in Sylhet-1 well, which was drilled to a depth of 2,379m before being blown out and destroyed. A large crater was created and subsequently filled with water at the well location and still shows gas bubbles coming out from its depths.

The most unusual and well-known blow-out in the petroleum exploration history of Bangladesh took place in 1997, at Magurchhara in the Maulvi Bazar Well-1 drilled by Occidental Oil Company of USA. The company drilled a vertical well to a depth of 840m and then planned to deviate the well in the subsurface, for which drilling was temporarily stopped. But due to lack of proper pressure maintenance, gas from a gas zone at 840m depth forcefully entered the drill pipe, made an uncontrolled rush to the surface and blew out the rig resulting in its total destruction. Although no life was lost, a huge fire broke out in and around the rig site, damaging the installations as well as the surrounding forest. An inquiry committee formed by the Bangladesh government concluded that negligence on the part of the company personnel caused the blow-out. [Badrul Imam]