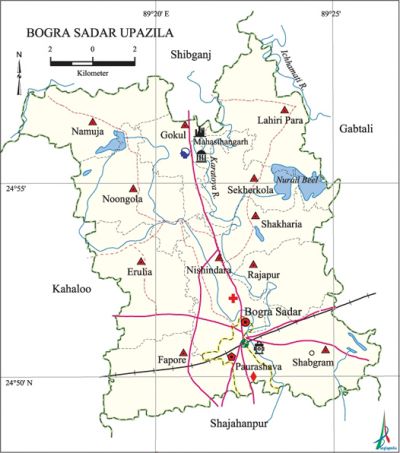 History of the war of liberation On 29 March 1971, the EPR, general people and students of Bogra under Captain Gias, killed 23 Pak soldiers and destroyed 3 military vehicles. In the middle of April 1971 freedom fighters looted about 4 crore taka from the State Bank of Pakistan at Jaleshwaritala of the Bogra Sadar and deposited to the fund of the mujibnagar government to meet the cost of the War of Liberation. Three persons were killed by bombing from Pak air force in Bogra Sadar on 23 April 1971 preceding their entry into Bogra Town with artillery. 20 Pak soldiers and more than 50 civilians were killed in various resistance movements and guerrilla attacks in the Upazila sadar. The Pak army killed 14 freedom fighters at Bibir Pukur; they also killed 9 freedom fighters at Shahidnagar (Char Lokman) and' buried them in a mass grave on the bank of the river Karatoa.