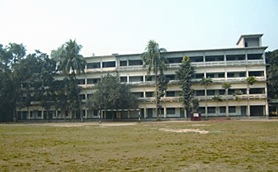 Bogra Zila School started its journey as private English-medium school in the mid 19th century. Founded at the initiative of local people, the school was nationalised by the government of Bengal in 1853 and it was turned into Bogra Zila School in 1865. Authentic information regarding the background of the erstwhile English medium school is not available. The school was nationalished following the move of the then district magistrate and collector Mr. Russel and deputy collector S Mukherjee. The government appointed Bhagabhoti Charan Ghosh as the Head Master of the School. At that time, there were only four teachers in the school. The provision of awarding books to the successful students was introduced during the tenure of next Head master AC Mukherjee. Holding of a colorful function on this occasion was also introduced then. The achievement of the school was very quick. The number of students in 1860-61 session was only 85, which rose to 363 in 1907-08 session. At present, about two thousand students, enrolled in two shifts, are studying from class three to ten. A total of 53 teachers including the Head master and 2 Assistant Head masters are engaged there to teach them.

Bogra Zila School has three academic buildings, a mosque, a rich library and an auditorium named after Aminul Haq Dulal.