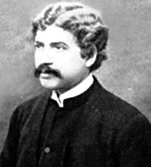 Bose, Sir Jagadish Chandra (1858-1937) pioneer in the field of physical, electro-physiological and plant-physiological research in India. He was born in mymensingh on 30 November 1858. His father Bhagawan Chandra Bose was a Deputy Collector. The Bose family had their original home in the village of Rarikhal in Bikrampur in the district of dhaka.

Jagadish Chandra had his early education in a rural school in Faridpur in the course of which he developed an interest in the folk plays of Bengal and in the stories and characters of the Ramayana and the Mahabharata. At the age of eleven he went to Calcutta where he studied at St Xavier's School and College, passed the Entrance examination of Calcutta University in 1875 and BA in Science group in 1879. Here, under the influence of Rev Father Lafont, he developed an interest in the physical sciences.

Later he was sent to England for higher studies. At the beginning he was enrolled for study in medicine which he had to give up for reasons of health. Later he joined Christ College, Cambridge, to prepare for the Natural Sciences Tripos examination and obtained the BA degree of the Cambridge University and the BSc degree of the London University in 1884.

Upon his return to India, JC Bose was appointed Assistant Professor of Physics at the presidency college, Calcutta, where he began his career as a teacher and researcher. In 1894 Jagadish Chandra started his research career and devised a series of experiments to demonstrate the optical behaviour of electrical waves such as reflection, refraction, total reflection, polarisation diffraction, and so on. The results of his investigations appeared in leading scientific periodicals such as The Electrician, the Proceedings of the Royal Society, the Journal of the Asiatic Society of Bengal and The Philosophical Magazine. On the basis of these investigations he was awarded the DSc degree by London University in 1896. In his methods of microwave generation he anticipated the modern wave-guides, while some of his other applications closely resembled those employed during the early phase of the development of radar.

During the period from 1899 to 1907, Bose was deeply involved in the study of responses in living and non-living substances. He was led to this new field of study by his observation of fatigue in his electric wave receivers or 'coherers' and its disappearance after some rest. Proceeding from Waller's criterion that capacity for response to electric stimulation could be regarded as the most universal sign of life, Bose attempted to show the generality of molecular phenomenon produced by electricity on living and non-living substances. In a series of brilliant experiments he demonstrated how animal and vegetable tissues responded to electrical excitation as also to stimuli due to heat, drugs and chemicals and mechanical stresses and strains and also how similar stimulations could bring about responses in certain inorganic systems. These investigations appeared in several journals, eg, the Proceedings of the Royal Society, and in the form of an excellent monograph, 'Response in the Living and Non-Living'.

From his studies, Jagadish Chandra Bose was inevitably drawn to biophysical and plant-physiological investigations upon which he brought to bear his physicist';s insight and experimental skill. He devised a number of inorganic models to reproduce responses to stimuli analogous to those noticed in animal and plant tissues. One such model consisting of coils around soft iron rods, a current source and a ballistic galvanometer served to illustrate the transmission of excitation in animal nerves. Of the various instruments devised by him, special mention may be made of the crescograph capable of magnifying small movements by a factor of ten million, conductivity balance, transpirograph, photosynthetic recorder and magnetic radiometer. Jagadish Chandra carried out those investigations with amazing energy and devotion and produced a voluminous literature from 1908 to 1934 in the form of research papers and monographs.

JC Bose retired from Presidency College in 1915. In 1917, he founded the Bose Institute for plant physiological researches. Later on, researches in plant and agricultural chemistry, physics and anthropology were taken up by the institute.

Jagadish Chandra visited Europe and USA on several scientific missions in the course of which he lectured before learned bodies on the results of his investigations and worked for some time (1900-1902) at the famous Royal Institution of London. He was Knighted in 1916. In 1920, he was elected to the Fellowship of the Royal Society of London and in 1928 to the corresponding membership of the Vienna Academy of Science. He was honorary member of several scientific societies of Europe and America. Bose was the President of the 1927 session of the Indian Science Congress Association and was a member of the League of Nations'; Committee for Intellectual Cooperation. He was a foundation Fellow of the National Institute of Sciences of India, now renamed as the Indian National Science Academy.

Unlike his great contemporary prafulla chandra ray, he did not show much interest in the social and economic implications of sciences, in the powers of science to ameliorate the condition of man and society. He was deeply philosophical and had a taste for literature and art, of which he has left ample evidence in his writings, particularly in his Bangla book Avyakta, and in the planning and artistic decoration of the Bose Institution. Sir Jagadish Chandra Bose died in 1937. [Md Mahbub Murshed]