Bronze Sculpture Hoards of metal cast images have been recovered from various sites of North and Southeast Bengal. Those found in the North are mainly Hindu and belong to the 11th and 12th centuries, whereas those from the Southeast are essentially Buddhist. Their production stretched over a long period, starting from the 7th century. These images are preserved in various institutions of Bangladesh, such as the bangladesh national museum in Dhaka, the varendra research museum in Rajshahi or the Mainamati Site Museum. Some are preserved in India, for example, in the indian museum, the asutosh museum, the vangiya sahitya parishad in Calcutta and the National Museum in New Delhi. Moreover, numerous bronze images have been repeatedly appearing in the Western art markets. Although said to be 'of unknown origin', they probably originate in the Delta of the Ganges. It is also a fact that images have often disappeared from Bangladeshi and Indian public collections only to find their way into the Western art market.

[[Image:BronzeSculpture1.jpg|thumbnail|300px|right|Fig.1 Vajrasattva, Mainamati] Style and composition Proper stylistic analysis and iconographic evaluations are required in order to consider the images in their historical/religious contexts, such endeavours will facilitate an iconological approach of the images.

In the composition of the sculptures the conventional rules were strictly followed. Typically, the image of the deity stands or sits on a pedestal and in front of a back-plate. Various iconographic motifs are introduced on these two parts of the image. These motifs contribute towards defining the symbolic aspects of the deity. Thus, a lotus may sustain the deity above the pedestal while the vehicle of a god may be depicted on its front side and a human devotee may be kneeling in front of it. The pedestal may refer to the lower cosmic level of the earth, which supports the deity. The back-plate may include motifs of a more divine nature: flames which run along the edge of the back, but in fact arise out of the divine body; a nimbus shaped like a lotus which refers to the heaven. Motifs practically generalised in stone sculpture are rarely noticed in bronze images, for instance, real and fantastic animals that refer to the elements or the kirtimukha (monstrous face) which protects the central image. 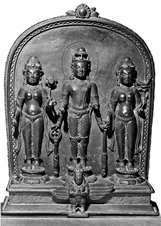 The central deity may be taller than the attendants distributed on either side. All of them are thus images of veneration, facing the viewer. Narrative scenes, like the marriage of Shiva and Parvati, were very rarely cast.

Local stylistic idioms emerged in each region, characterised by a particular selection of motifs and by their treatment, by a specific rendering of the volumes or by a specific partition of the space allotted to the different elements that compose the image. In course of time, the shape of the motif changed, which allows us to follow their evolution and propose a relative chronology. A proper iconographic study cannot be proposed without also considering the period and place of production of the images. Similarly, the iconology of the images cannot be done without including in this study the style of the images. A depiction of Visnu in the early period (7th/8th c) differs completely from one of the same god in the 12th century. New motifs were introduced; the treatment became more and more refined, and a more heavenly image was projected; and the spatial relations of the deity with his surroundings were transformed. 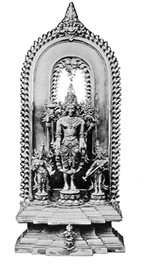 Lalmai Hills The earliest dated image, the present whereabouts of which is unknown, was donated around 700 AD by Queen Prabhavati, wife of Deva Khadga. Found in Comilla district it inaugurates a stylistic idiom which is illustrated by numerous bronzes cast at Mainamati and in the surrounding region. It holds a major position in the introduction of metal casting in Indonesia. Other isolated examples of this local style were found in Buddhist sites of Bihar (Nalanda, Kurkihar) and in Hindu icons found at Kalhipara in Assam. These examples also originated from the region. 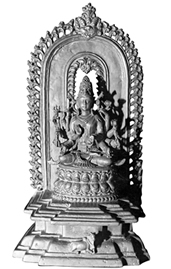 Those finds reflect the importance of this school which reached a high level of craftsmanship producing large size images, as illustrated by the Vajrasattva recently excavated at Mainamati. (fig 1) A particular style eventually emerged. (fig 2) The images have smooth shapes, round limbs, oval and full faces with wide-open eyes and smiling mouths. The movement and the position of the body are marked by elegance and easiness, which reflects peace and harmony. Most images share the following features: the pedestal is usually solid and rectangular in shape, with a narrow moulding running along the upper and lower edges; it supports a circular plain back-slate adorned by flames, and eventually a beaded row with an undulating line. The upper part of the tiara is curved and is topped by a small bud.

Jhewari (Chittagong district) A homogenous stylistic group of Buddhist bronzes, mainly depicting the Buddha, were discovered in the vicinity of Chittagong. Some illustrate the Buddha seated on a cushion without any back slate or any pedestal, features which are also noticed in bronzes found in nearby Myanmar. Numerous tiny curls cover the broad turban or usnisa, the eyes are elongated and wide open, the smiling mouth is pointed; the flap of the dress falling on the left shoulder wears parallel lines incised for showing the pleats which often end in a strict horizontal line - a feature which can also be noted in Pagan (Myanmar). Some Buddha images are much more hieratic, with elongated faces, curled lips, incised eyebrows and front-lines stressed by plain edges; they depict a meditative smile. Some other images, smaller and often depicted in groups, reflect the stylistic idiom of the Lalmai Hills, integrating either the large back-plate and the umbrella with the knotted garland above it or the large round nimbus with flames and the wavy line along its edge. 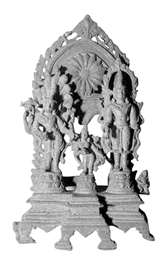 Vikramapura Some rare metal images have been found in this area, among which is a silver image of Visnu. This constitutes a major artefact of the 12th century. (fig 3) Though a long gap has elapsed between the images from the Lalmai Hills and these images, the stylistic features still relate this late production to earlier one. 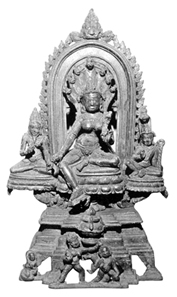 For instance, the high pedestal reproduces the same composition, but the two mouldings show more depth, include more levels, and are now articulated on recesses. The back-plate is open behind the god but still preserves a plain and broad arch. Flames run along the inner and outer edges of this arch which is crowned by a large kirtimukha which is proportionally very large. Gorgeous jewellery pieces hide the body of the god and his wives; a tall crown surmounts their heads. Each image is cast in the round. These metal images reflect a perception of the deity as a god of heavenly richness, which differs from the simplicity of forms noticed in the Lalmai Hills. When compared to earlier bronzes, the images of the deities are proportionally much smaller than the back-plate. Various images, mainly of Shiva (fig 4) may also be related to the area, such as the Shiva Nataraja worshiped in a temple near Chidambaram in Tamil Nadu where it was perhaps brought by a rajaguru. All those images betray stylistic features which bind them to the area, although they are earlier in origin than the Visnu.

North Bengal Buddhist sites no major hoard has so far been recovered in sites like Paharpur and Mahasthangarh, but images of various iconographies, including Hindu or Jain ones, and of different periods, have been collected here.

The relative scarcity of images makes it impossible to define the stylistic idiom of the region. Thus we face here a situation which differs completely from the one encountered in Southeast Bengal.

It is, however, evident that local ateliers were capable of casting major images, since rather large images have been collected, such as the gilded Bodhisattva from Mahasthangarh (fig 5) (84 cm) or the torso of the Buddha found at Paharpur, both reflecting great artistic skills and an accurate perception of the plasticity of the body and its smooth surface. Both are also clearly associated with the stylistic idioms of Sarnath and various Buddhist sites in Bihar.

North and Western Bengal Hindu images have been recovered from small hoards scattered all over North and Western Bengal; for instance at Sahibganj (Rangpur district), at Sagardighi (Murshidabad district), Mandoil or Nimdighi (Rajshahi district). Some of the bronzes are large. They can be dated to the 10th and 11th centuries and reflect a stylistic unity which make them distinct from the southern idiom. For instance, although the pedestal shows the same composition as in the south with superimposed groups of mouldings, it is sustained by feet (like the bronzes of Bihar) while the back-plate is carved through and its various elements are distinctly separated.

The composition is well equilibrated, but the ornamentation is overwhelming (figs 6-7). The nimbus shaped as a lotus with thin and elongated petals is usually integrated within the back-slab, fixed within the plain aura, along the edge of which a row of flames runs, and which culminates into a triangular ornament crowning the composition (Sahibganj); this ornament seems to be replaced by an umbrella protecting the deity (Mandoil) or by the kirtimukha (Sagardighi). The pedestal combines the superimposed groups of mouldings and the feet; usually triangular ornaments hang below each of the recesses.

Images of the 10th and 11th centuries reflect some rigidity and some hieratism in the attitude of the deities and include only a limited ornamentation. But later images of the 12th century, such as the image from Hatpukuri in Dinajpur District (fig 6), become three-dimensional. All three deities stand here in various positions, which give them plasticity and introduce movement in the composition. The back-slab is also proportionally large, a feature typical of the 11th century and of later metal images. The ornamentation is overwhelming, with features which characterise the images of the time (figs 3 and 6). [Claudine Bautze-Picron]