Burhanuddin Upazila (bhola district) area 284.67 sq km, located in between 22°21' and 22°34' north latitudes and in between 90°35' and 90°51' east longitudes. It is bounded by bhola sadar and daulatkhan upazilas on the north, lalmohan on the south, tazumuddin upazila on the east, bauphal upazila on the west.

Administration Burhanuddin Thana was formed in 1928 and it was turned into an upazila on 15 April 1983. 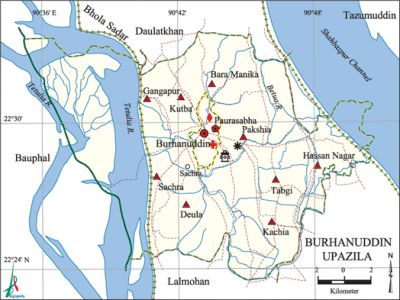 History of the War of Liberation During the war of liberation in 1971 encounters between the freedom fighters (under Siddiqur Rahman) and the Pak army were held in villages Sachra and Deula. On 22 October the Pak army set many houses of the villages Tetulia, Betua and Deula on fire. Siddiqur Rahman with his compatriots attacked the Pak army at Deula Dighir Par in which about 50 Pak soldiers including their collaborator, Officer in Charge (OC) of the Thana, were killed. On 29 October the freedom fighters attacked Burhanuddin Police Station, and later on the Pak army entered into the villages and killed many people indiscriminately.

Marks of the War of Liberation Memorial monument 1 (in front of the upazila complex).