Butterfly (prajapati) any of the large diurnal group of insects of the order Lepidoptera. Like moths they have siphoning type of mouthparts on the underside of head in the form of coiled proboscis. In general, butterflies have slender bodies, are brightly coloured, and fly at daytime. There are butterflies, called 'skippers' that are stout bodied and dull-coloured with a hook at the apex of antenna. The most prominent features of the head of an adult butterfly are a pair of large, almost hemispherical, compound eyes and a pair of long, clubbed, jointed antennae projecting from the head between the eyes. The abdomen is a roughly tubular structure made up of ten segments, the last two or three being modified as the external genitalia. The entire body of adult butterfly, with the exception of the compound eyes, is covered with hairs and very flattened scales. 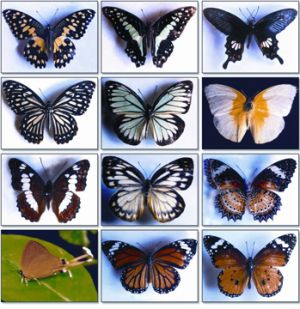 Butterflies help to pollinate many flowers. They are highly prized for their aesthetic value. A number of butterflies may be classed as economic pests. The entire group is usually classified in 12 families. About 124 species of butterflies have been described from Bangladesh. Papilionidae (swallowtails) include the lemon butterfly, Papilio demoleus and P. polytes. Members of the family Pieridae (yellows, whites, sulphurs) occur abundantly throughout the country. One of the important pest of this family species is the cabbage butterfly, Pieris brassicae. The family Nymphalidae (four-footed butterfly) is also very common and widely distributed. Junonia spp are occasional pests on ornamental plants. Several species of Lycaenidae (blues, coppers, hairstreaks) have been recorded. The pomegranate butterfly, Virachola isocrates is an important member of this family. The Hesperiidae (skippers) includes among others the noted pest, rice skipper (Pelopidas mathias).

Butterflies are found in a variety of habitats, from ordinary home gardens to scrubs and forests. They occur in plenty in both the evergreen and semi-evergreen forests of the Northeast and Southeast regions of Bangladesh and in the deciduous forests of Madhupur tracts. Being closely associated with plant life, habitat disturbance affects them most. Some being exclusively forest dwellers their presence or absence indicates ecological changes in habitat. [Monawar Ahmad]