Charpatra Mura is a small but interesting archaeological site in mainamati. It is situated in the northern part of the Lalmai ridge at about the centre of the Comilla Cantonment area. A small Hindu shrine, 45.7m x 16.8m, was uncovered here. 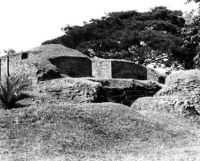 The temple has two distinct parts, an open pillared hall in the badly damaged front part and a cella at the back in the west. The latter part was found less damaged and decayed, that is to say, better preserved and undisturbed. It could therefore be properly excavated and uncovered. The exterior of this cella or temple proper at the back shows a fantastically complex and variegated shape produced by a multiplicity of angles and corners resulting from a combination of symmetrical projections and offsets at lateral and vertical planes, maintaining, nevertheless, a delicate balance between exotic growth and basic strength and proportions of the original form and the traditional plan. The overall effect is highly pleasing.

A few very significant objects were discovered in this monument. These are a bronze relic casket and four copperplate grants - three of them issued by the last two kings of the chandra dynasty and the fourth by a Later-Deva king, all in favour of a Ladaha Madhava (Visnu) temple situated in devaparvata. One record identifies the locality as Pattikeraka. On the basis of our present knowledge and information, it may be stated with absolute certainty that this new settlement was definitely located in the Lalmai -Mainamati area, and occupied a part or the whole of the old city of Devaparvata, and that the Ladaha Madhava temple of the inscriptions may reasonably be identified with the excavated Charpatra Mura temple . The temple was probably reconstructed, if not originally built, by the Chandra King Shri-Ladahachandra (c 1000-1020 AD) who derived his name from that of the consecrated deity. Alternatively, the deity derived its name from that of the builder king who appears to have been especially devoted to him. This king issued two of the four grants found here. The appellation, Charpatra Mura, is related to the discovery of four copperplates. [M Harunur Rashid]