Chess a game for two players who play with 16 pieces on a square board composed of 64 square spaces, alternately dark and light in colour. Each player is provided with 16 pieces of black or white colour. These are placed on squares of two horizontal rows nearest each player. Eight pieces of the first row include two rooks, or castles, placed in corner squares, two knights in the adjoining squares, two bishops next to the knights, the queen on the remaining square of corresponding colour, and the king on the remaining centre square. The remaining eight pieces are called pawns and are all placed on the second row. 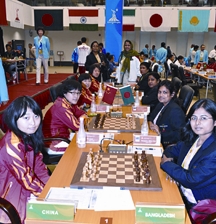 The game had probably first appeared in India. From there it went to Persia, and Muslims carried it to Europe. In the thirteenth century chess spread throughout Western Europe. In some ways, chess resembles Indian dice-play. Chess used to be played with different rules in different provinces of India. In the last one hundred years, the rules and regulations of chess underwent considerable changes in Europe and have now become more acceptable and popular among the common people.

Chess is basically a game where a battle is fought between two kings. The aim of the game is to have one king check or attack the other. In some places this game is called 'checkmate game'. The primary goal of chess play is to make the (opposite party's) king a prisoner by any means.

In course of the game, when a party's king is caught in the trap of a check or is made a prisoner, that king's party is defeated. In Bangladesh is National Professor Dr. qazi motahar husain (1897-1981) is regarded as the pioneer of Chess. He was a famous intellectual and a good chess player. He got the first position by scoring 101 points out of 103 in the All India Chess Brilliancy Competition sponsored by the Statesman of Calcutta in 1925.

In undivided Bengal, he retained his lead in the world of chess from 1929 to 1969. He was the founder-president of the All Pakistan National Chess Federation, which came into being in 1969. After independence, he was also the founder-president of the Bangladesh Daba Sangha, which later (in 1974) became known as Bangladesh Chess Federation. The Federation has been arranging the Dr. Qazi Motahar Hossain International Masters Chess Tournament since 1985 in his honour.

Among other proficient chess-players of the earlier period were Professor Abdur Razzaque, Akmal Hossain, and Mian Abdus Salek. National chess competition has been arranged yearly since 1974. Niaz Morshed became champion in four consecutive years from 1979 to 1982. A national women's chess competition has been arranged annually since 1979, in which the only woman Master of Bangladesh, Rani Hamid, became champion 12 times. In 1986, Niaz Morshed became champion in the Grand Masters' Championship, in which 17 countries of the Asian Zone 3.1 participated. This made him the first Grand Master of Bangladesh. Ziaur Rahman became the second Grand Master of the country in 2001.

Bangladesh Chess Federation has become a member of the International Chess Federation in 1979. Every year it arranges some 15 to 20 tournaments at the national and international levels. These tournaments include National Women's Junior, Sub-junior, Second Division, International Master's and Grand Master's Chess Tournaments. About 26 local clubs are registered in the First Division. The Second Division comprises some 30 to 35 clubs. In the National Championship, a national B Group is formed with district champions and 16 persons from different corporations and cities. 14 of them are chosen through competitions and they appear in the National Championship competition. [Gofran Faroqi]