Chilli (marich) pod of a bushy plant, Capsicum frutescens, of the family Solanaceae, widely used as spice, native of Mexico. In Bangladesh the crop is grown in an area of about 66,235 ha and annual production amounts to about 52,215 m tons. Chilli is a good source of vitamins and phosphorus. 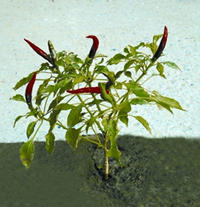 It can be cultivated in both the summer and winter seasons; average yield of green chilli is 5 to 6 m tons/ha. The crop is widely cultivated in Bangladesh. As a winter crop, however, it is grown mostly in Comilla, Noakhali, Faridpur, Barisal, Patuakhali, and Bogra. There are several local varieties like Balijuri, Bona, Bain, Saita, Suryamukhi, Paba, Halda, Dhani, Shikarpuri and Patnai.

In rural areas chilli is commonly taken with pantavat (boiled rice in water). Both green and dry chillies are used as spices for the preparation of various curries. Dry chilli is an ingredient of curry powder, sauces and pickles. Until the beginning of the 20th century chilli was exported from Bengal on a very large-scale. Among other spices chilli was an attraction for the east india company to come to the eastern part of India. [AKM Matiar Rahman]