Chittagong District (chittagong division) area 5282.98 sq km, located in between 21°54' and 22°59' north latitudes and in between 91°17' and 92°13' east longitudes. It is bounded by khagrachhari and rangamati districts and tripura state of India on the north, cox's bazar district on the south, bandarban, Rangamati and Khagrachhari districts on the east and noakhali district and the bay of bengal on the west. Chittagong District is quite different from other districts for its unique natural beauty characterised by hills, rivers, sea, forests and valleys. 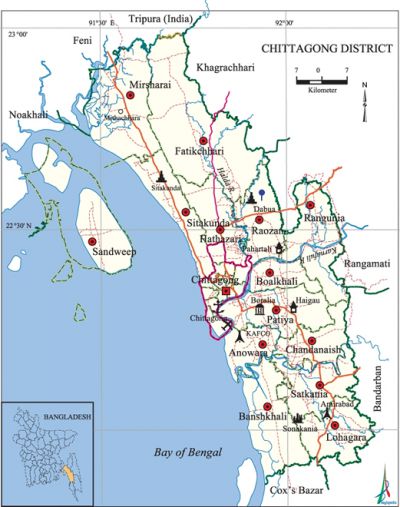 Historical events Chittagong had been an international sea port since the ancient time. The Arab traders had business transactions with this port since 9th century AD. Chittagong region was under the kingdom of arakan during sixth and seventh centuries. Before the Muslim rule Chittagong had alternatively been under the kings of Arakan or the kings of Burma. Sultan Fakruddin Mubarak Shah (1338-1349) of Sonargaon conquered Chittagong in 1340. After the defeat of Sultan Giasuddin Mahmud Shah in the hands of Sher Shah in1538, the Arakanese again captured Chittagong. From this time onward until its conquest by the Mughals in 1666 this region was under the control of the Portuguese and the Maghs of Arakan. The Mughal Commandar Bujurg Umed Khan expelled the Portuguese from the area in 1666 and established Mughal rule there. The Mughals renamed Chittagong as Islamabad. On 18th April 1930, the revolutionaries looted the Chittagong armoury under the leadership of Mastarda surya sen. During this time the leaders of the women revolutionaries were pritilata waddedar, Bina Das, Lila Ray, Kalpana Dutta etc. Revolutionary Swadesh Roy was shot dead by the British soldiers in the Kalar Pole encounter. Besides, wounded Debu Prashad, Rajat Sen and Manaranjan Sen committed suicide to avoid arrest. In 1933 a number of revolutionaries including Masterda Surya Sen, Kalpana Datta hide out in the house of Kherada Prava Biswas of village Garla. Surya Sen and Brajendra Sen were later arrested by the British soldiers.