Chittagong War Cemetery is a burial-ground of the soldiers who died in the Second World War in the eastern front. It is situated on the Badsha Meah Road (Joynagar Mauza) in Chittagong city. The site of the cemetery was originally a paddy field adjacent to a horseshoe shaped hill spread on the east and south, and located two and half miles away from the then Chittagong city. This cemetery is maintained by the Commonwealth War Graves Commission. In this cemetery there are 755 graves of war casualties. 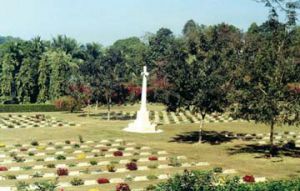 During the war the pioneer camp of the Fourteenth Army of the allied force was set up in Chittagong along with facilities for army training and the British General Hospital No. 152. The hospital remained operative from December 1944 to October 1945 and initially 400 corpses were buried in this cemetery under the supervision of the army.

At the end of the war the additional corpses were also brought to this cemetery from other temporary burial places in Lusai, Dhaka, Khulna, Jessore, Cox's Bazar, Dhowa Palang, Dohazari, Rangamati and Patiya. The names of 6500 seamen and naval personnel who died and the names of 15 ships sunk during the war action are available in a register kept in a structure of the cemetery. [Shamsul Hossain]