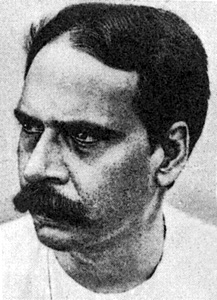 Chowdhury, Pramatha (1868-1946) litterateur, essayist, and one of the architects of chalita bhasa, was born on 7 August 1868 in jessore, son of Durgadas Chowdhury. His parental home was at Haripur in pabna. He passed the Entrance examination from Calcutta Hare School and FA from St. Xaviers' College. He stood first class first both in BA (1889) honours in Philosophy and MA (1891) in English. He was also fluent in French. He went to England (1893) to study for the Bar. After becoming a barrister he returned home and joined the Calcutta High Court. He married indira devi chowdhurani (1891), a daughter of satyendranath tagore.

Pramatha Chowdhury served variously as lecturer at Law College, manager of the Tagore Estate and the Dakshineshwar Devottar Estate, but he was more interested in literary pursuits, either editing and publishing journals or writing. He edited and published the monthly journal sabujpatra, which introduced and popularised chalita prose, and promoted a host of writers, including rabindranath tagore. Many satirical essays of Pramatha Chowdhury, under the pseudonym ‘Birbal’, were also published in this journal. He also edited other journals such as the Viœva-Bharati (quarterly) and Alaka (monthly).