Christmas (literally, Christ's mass) the mass of Christ, the festival of Christ's birth celebrated by most Christian churches on 25 December, a festival devoted mainly to family re-union and jollification. The observance of Christmas is believed to have dated from 200 AD. In 354 AD, December 25 was declared as Christ's birthday and affirmed it by the Pope in 440. Socially, Christmas was observed to counter pagan Roman festivals. 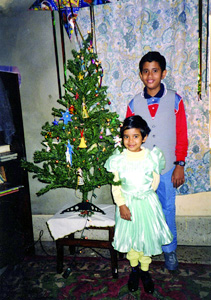 Though Christmas has religious roots, it is becoming an increasingly secular festival, an occasion for people to enjoy themselves, have parties, send cards and give gifts. The agent of presents is known variously as Father Christmas, Santa Claus, and Saint Nicholas. Christmas cards first appeared in the mid-19th century. The Christmas tree, usually a coniferous tree, is decorated with lights and small ornaments, often with a star or an angel on top. The creche, the scene of Jesus as a baby with Mary and Joseph in the manger, also forms part of the Christmas celebrations among Catholics.

Traditionally, children in the United States and England hang up stockings on Christmas Eve for Santa Claus to fill with presents. Gifts are also placed under the Christmas tree to be opened on Christmas morning. Special food is prepared, such as roast turkey, suckling pig, goose, plum pudding, Christmas cake, etc. Wandering carol singers sing Christmas carols from house to house.

Local delicacies such as pitha, payesh, polao or biriani are prepared for invited relatives and friends. Hotels and restaurants serve western Christmas fare, and bakeries sell Christmas cakes. Members of the Christian community pay courtesy calls on the President and the Prime Minister of Bangladesh. [Selmon H Dio]