Chuadanga Sadar Upazila (chuadanga district) area 289.59 sq km, located in between 23°29' and 23°42' north latitudes and in between 88°47' and 89°00' east longitudes. It is bounded by alamdanga upazila on the north, jibannagar upazila on the south, jhenaidah sadar, kotchandpur and harinakunda upazilas on the east, damurhuda upazila and west bengal state of India on the west.

Administration Chuadanga upazila was established in 1984. Although Chaudanga municipality was formed in 1960 it began functioning in 1965. 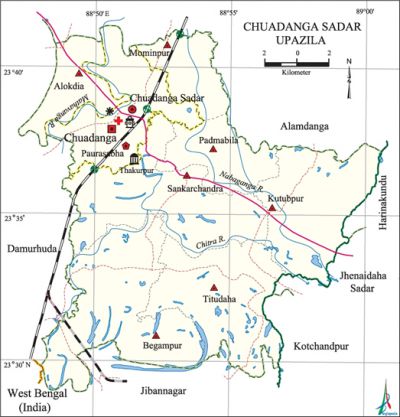 History of the War of Liberation During the war of liberation in 1971 Chuadanga Sadar Hospital was the district headquarters of the Pak army. The Pak army brutally killed about 300 innocent persons at the backyard of the hospital (present Shantipara).

Marks of the War of Liberation Mass grave 1 (Shantipara).

Sources of drinking water Tube-well 89.16%, pond 0.06%, tap 7.61%, and others 3.17%. The presence of intolerable level of arsenic has been detected in shallow tube-well water of the upazila.

Natural disasters The floods, draughts, excessive rainfall, tidal bore and cyclones of 1970, 1971, 1984, 1988, 1998 and 2001 caused huge loss of life and damages to settlements, communication facilities, crops and livestock of the upazila.