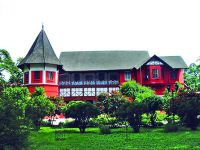 Chummery House also called Chamery House, was built in 1920. This English cottage type building is located in dhaka opposite the high court building. It was designated to be the residence of unmarried British women officials working in Dhaka. Although fairly old, it still retains its original architectural form. The building served as a hostel of girl students of the university of dhaka for some time. During the Pakistan period and for some time after independence of Bangladesh, it was used as headquarters of the Public Service Commission.

In 1985, the building was handed over to the Centre for Integrated Rural Development of Asia and the Pacific (CIRDAP) and the building is now known as the CIRDAP House. [Sadat Ullah Khan]