Cinchona (or chinchona) name for any evergreen shrub or tree of the genus Cinchona, of the family Rubiaceae, closely related to coffee, and native to the Andean highlands from Bolivia to Colombia. The genus has 38 species with opposite leaves and pink or whitish, and sometimes fragrant flowers in clusters. Cinchona is the source of quinine, a substance for curing malarial and some other types of fever. It also contains other alkaloids which individually or as a mixture called totaquina are of considerable value in medicine. 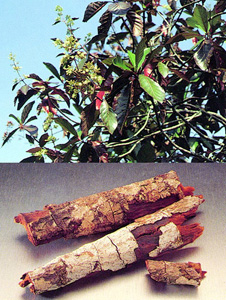 Cinchona tree (above) and its bark (below)

Of the 30 distinct alkaloids that have been isolated from cinchona bark, quinine is by far the most important, followed by quinidine, cinchonidine and cinchonine. The trees have been named in honour of the Countess of Chinchon in Peru who, according to a legend, was cured of a fever in 1638 by a preparation of the bark of the tree. The early Americans were already using it as a cure for fever. She introduced the trees to Spain. Later, missionaries publicised the medicinal properties of the bark in the countries of the Asia-Pacific. Sir Clement Markham, Surveyor General of the Government of India, introduced it into Bengal in 1862. This was the time when some parts of Bengal were decimated by malarial fever and kala-azar (a kin of malaria).

The climate, soil and terrain of Darjeeling, Assam and Sikkim were found to be suitable for cinchona plantations. Several government and private plantations were set aside for cinchona production in the 1870s. A cinchona factory was also established in Darjeeling. Mainly three species of cinchona were cultivated in Darjeeling C. succirubra (red bark), C. ledgeriana (yellow bark), and C. officinalis (brown bark). At the Darjeeling Cinchona Factory, both cinchona febrifuge and quinine were produced from the barks of Cinchona.

By 1901 India became self-sufficient in quinine production. Eventually, India began to export quinine and cinchona febrifuge. Health historians believe Bengal was saved by quinine. To save people from the scourge of malaria, quinine was distributed at a nominal price through local post offices so that people in rural and urban areas had easy access to it. Now quinine extraction from cinchona has been replaced by more sophisticated synthetic drugs. [Sirajul Islam]