Difference between revisions of "Circus"

Circus the first ever circus troupe of Bangladesh, the Lion Circus, was founded in 1905. The name of this troupe was changed in 1970 to Sadhana Lion Circus, which still operates.

During the period from 1947 to 1970, several circus companies used to perform regular shows. Among these, leading parties were the Baby Circus of Radhika Mohan Modak, the Azad Circus of Juran Karamakar, satkhira. the Royal Pakistan Circus formed in 1947 by Laxman Das of barisal, the RN Doll and Dance Circus of Radanath Sarkar, narayanganj, Laxminarayan Circus of Kartik Sarkar, Nawabganj, the East Pakistan Circus of Banomali Modak, the Lion Circus of Sadhu Das, the Seven Star Circus and the New Star Circus formed in 1965 by MA Samad of brahmanbaria and the Rowshan Circus organised by Ali Akbar of |rangpur in 1968. The most leading circus troupes formed during the post liberation era were the Bulbul Circus of Abdus Sattar (Mahasthangar-Bogra), the Royal Bengal Circus of Biren Chandra Das of Barisal, the Sabuj Bangla Circus of Sunil Chandra Paul (Feni), the Sundarban Circus of Satkhira, the Kavchan Circus owned by Mukul of Narayanganj, the Kohinoor Circus of Anwar Khan, chittagong, the Rowshan Circus of Akbar Sheikh, Saidpur, the New Star Circus of MA Samad Brahmanbaria, the National Circus of Abdul Bashir, the Lion Circus of Niranjan Sarkar, Nababganj-Dhaka, the Laxminarayan Circus and the Rajmahal Circus owned by Ratan Sarkar and New Sabuj Bangla Circus of Shoilen Babu, Bardhanpara-Dhaka and the Sonar Bangla Circus of Basanta Kumar Madok, Keraniganj-Dhaka. 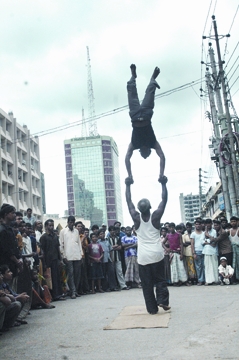 At present, the regular performance of circus show has declined significantly. There are only ten to twelve large circus troupes in the country now. Each of these troupes has trained animals including Royal Bengal Tiger, elephants, horse, dog, goat, monkey, porcupine. Besides there exist some small Circus troupes in Bangladesh. But most of those do not have any valuable trained animals like elephant, tiger and bear. Rather trained goats and horses are used by those parties to entertain the spectators.

Beside the large and the medium level circus troupes, there are some professional circus-showmen who independently perform in the rural market places. No pandel, ticket counter or valuable and heavy equipment are used for their shows. Each team comprises of 3 to 5 persons and they entertain pedestrians with a few events of circus and jugglery. In return, they take voluntary donations from the crowd.

Apart from these, there are some very small circus troupes, who perform only one event-in fairs and exhibitions throughout Bangladesh. The show known as 'Death-well'; is very popular because of its thrilling, and risky performance. A highly skilled motorcyclist runs his vehicle tracking the inner-wall of the well.

Initially in Bangladesh there was no participation of female performers in circus-shows. Then the male performers had to present themselves in female get-up. Later many female performers were seen to have come in circus shows. According to a survey, 80 percent members of the Royal Bengal Circus team are women and they perform 90 percent of the events they perform. The percentage of women artistes and performers in the New Star Circus troupe is 75 and 85 percent events of the show are performed by them. The figures are 70 percent and 75 percent respectively in the Laxminarayan Circus.

Moreover, many child artistes are engaged in the country';s circus teams and they are assigned in perform mostly risky and dangerous games. The circus proprietors generally recruit helpless and abandoned orphan boys and girls in their teams and they stay voluntarily with their respective team only for food and secured shelter!

Each circus troupe has at least a male dwarf and he plays the key role of joker to entertain audience by his circustic play and amusing acting. They are also given support by the management like other helpless children and women.

A forum of circus proprietors named as Bangladesh Circus Owners Association was formed in 1993 with a view to promoting the show of circus in the country. A total of twelve circus troupes have got its registration.

In Bangladesh, circus being a performing art till now is enjoyed by common audience together irrespective of sex and age. But it is a matter of regret that this number of audience of circus shows has been declining with the gradual expansion of very attractive media like television and film. [Saymon Zakaria]