Conch Crafts an ancient folk craft, dating at least two thousand years back. Conch artifacts have been discovered in the ruins of Korkai, the ancient Tamil capital. The Tamil poems, Maduraikkanchi and Silappathikaram (c 1st cent AD) refer to conch craft flourishing in different cities of Korkai and Gujrat. Conch craft flourished in Myxore, Hyderabad, Gujrat and Kathiawar around the 1st and 2nd centuries AD. Subsequently, it developed mostly in the city of dhaka, which gradually became the main centre for conch craft in India. 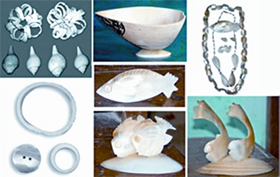 James Hornell conjectured that conch craft concentrated in Dhaka rather than Korkai, because the people engaged in this craft fled to Dhaka from the Tinevelli district following the invasion of Malik Kafur in the 14th century. Dinesh Chandra Sen notes, however, that the use of conch bracelets by Bengali women was described in ancient bangla literature and suggests that conch craft developed independently in Dhaka. It is generally believed that conch craft began in Dhaka during the time of vallalasena in the 12th century. The community dealing in conch craft first settled in Vikrampur. During the Mughal rule, in the 17th century, they were brought to Dhaka and settled down in what is now known as Shankhari Bazar.

A particular species of sea conch available in Jafna, Sri Lanka, and Titpur, in Madras, constitutes the basic raw material of this craft. Conch ornaments are made of a variety of species of conch, with titputi being the best, followed by jadki and pati conchs. Conchs of different sizes, ranging from two and a half inches to four inches in diameter, are used to make ornaments.

In 1910 one hundred and fifty titkaudi conchs cost Tk 40-45, while in 1999 they cost Tk 14,000-30,000. The tools used in making conch ornaments include conch saws, hammers, drills, and chisels. Hydrochloric acid is used to clean the outer layer of the conch, while nitric acid and zinc powder are used to fill up the holes in the conch. Nowadays electric saws are used to cut conchs. Another important tool used in the craft is a round wooden stick to which a rough mixture of sand, resin, incense and mustard oil is applied. This tool is used to smoothen the inside of conch-shell bangles.

Several kinds of files or rasps are used to smoothen the rough edges of the bangle after it has been sliced off. Buli, a kind of nib-chisel, is used to engrave and make designs on the ornaments. A special type of drill is used to make holes in bangles, through which gold wire may then be threaded. A maximum of four thick bangles or a minimum of ten thin bangles can be made from one standard size conch. After the conch has been cut into suitable slices, these are sent to artists for smoothening and carving the inner and outer surfaces. The conch artist uses wax, nitric acid and a solution of zinc powder to fill up the cracks and holes of bangles. The buli is used to make attractive designs of flowers, leaves, fishes, birds, etc, on the ornaments. The technology used in making conch ornaments is still very primitive.

Although bangles are the most common conch ornaments, other items such as earrings, hair-clips, necklaces, watch chains, rings are also made of conch. Recently flower vases, ashtrays, safety-pins, paperweights, etc, are also being made of conch. A particular type of conch, called water-conch, is highly polished with a solution of hydrochloric acid and water. Various designs are then engraved on it. This conch is used to keep sacred Ganges water for puja rituals. Another type of conch is blown as a horn during weddings or puja ceremonies.

Conch bracelets were exported from Dhaka to different parts of India in the past. Records show that conch bracelets worth Tk 500,000 were exported from Dhaka to Nepal, Bhutan, China and Burma annually in the 17th century. At present conch items are mainly consumed internally, with Sankhari Bazar being the main trading centre. The sale of conch ornaments increases during festivals and fairs. The large-scale migration of Hindus from East Bengal to India after 1947 led to a decline in the market demand for conch products. Consequently, the conch industry suffered as a whole and the number of artisans engaged in this profession has also declined. [Shipra Sarker]