Coquina Horizon detrital limestone horizon composed wholly or chiefly of mechanically sorted fossil debris that experience abrasion and transport before reaching the depositional site and that is poorly to moderately cemented but not completely indurated. 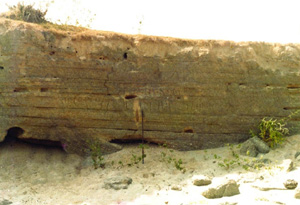 st martin's island exposes a sequence of marine sedimentary rocks ranging in age from Late Miocene (around 10 million years ago) to Recent. The fossiliferous marine horizon, the Dakshinpara Formation, is overlain by the Holocene (0.1 million years before present till today) coquina bed, which is part of St Martin's Limestone Formation.

With the gradual rise of the sea level dead shell fragments were thrust toward the shore of the island by wave action and finally heaped up as a narrow ridge of coquina horizon along the present southeast border of the island. Coquina bed is also known as shelly limestone. It is best exposed in a 6.5m cliff of 166m length along the eastern coast of Dakshinpara. It is composed entirely of broken and crushed shells of mollusca, ostracoda, foraminifera, corals held together by a calcareous cement; tiny shells are often found unbroken, brown with grey weathered surface, massive and cross-bedded, loose and friable. Many of the shells are similar to those currently found strewn over the beach. Micropalaeontological investigation of the samples of coquina reveals the presence of Elphidium crispum, Rotalia tectoria and Amphistegina radiatavar.

Radiocarbon dating of a 3m notch of the coquina limestone cliff (photograph) located in the central coast of Dakshinpara, St Martin's Island, indicates an age of about 450 years at the base and 292 years at the top. From this coquina cliff the present mean uplifting rate of the island can be calculated as 19 mm/year. [Sifatul Quader Chowdhury]