Cottage Industry refers to the traditional artisanship of rural people of Bangladesh, who produce various household items with locally available raw materials and artistic skills inherited through ages. For their own use and for livelihood, they make those artistic products by hand depicting the design and motif of the nature of Bangladesh and its people, birds and animals, foliages, plants and trees, rivers, streams and sky. Cottage industry is called a synonym of handicrafts, artistic work in wood and metal, amateur artworks and rural artistry. At present the cottage industry has expanded to urban area.

According to Bangladesh Small and Cottage Industries Corporation (BSCIC), Cottage industry is a small-scale industrial unit run by the members of the same family either on full or part time basis. Its maximum number of workers should be limited within 20; it uses indigenous technology and is not run by power. If it uses power-run machinery, the maximum number of workers should be ten. The national board of revenue (NBR) considers the cottage industry as an industrial unit run by a maximum of 50 workers using local skills without adopting power-run mechanical equipment. The agriculture Census Report of 1983-84 defined the cottage industry as a household level manufacturing unit that produces goods manually. It has been mentioned in the Industrial Policy-2010 that the net asset of a unit of cottage industry without the land and the factory should be less than five hundred thousand taka and its maximum workforce should be ten and they would preferably be family members.

The history of cottage industry is very old. Moroccan traveller ibn batuta (1304-1377) in his travelogue mentioned the world famous product of muslin produced in Bengal which earned appreciation from all over the world for its extraordinary quality. In pre-British Bengal, the cotton industry was organised under the pure handcraft or the domestic system of production. During the Mughal rule in Bengal, Cottage industry used to be patronised by the government. Initially the European merchants and companies, from Britain and Holland, and the east india company, financed the weaver and artisans, and other handicraft makers for producing goods of export quality. Later, the employees of East India Company imposed a series of repressive steps on weavers, artisans and other craftsmen engaged in cottage industries. As a result the export of textile and handloom products reduced significantly. For instance, export earning from fabric, which was 13 million rupees in 1815 declined to one million rupees in 1832 and became nil in the following year. Contrastly, import of foreign made fabric, basically industrial product began in 1832. Only in that year, the East India Company compelled the domestic consumers to buy fabric worth 4 million rupees imported from England. The partition of 1947 caused further damages to the cottage industry in Bangladesh as many Hindu artisans and craftsmen left the country. So a vacuum was created in the trading of cottage industry during the initial stage of Pakistan era. There was no big capital investment in this sector in those days, although there were about 1600 highly skilled professional artisans and four hundred thousand weavers in the then East Pakistan. Handloom and textile products of those people could fulfill the demand of fabric in the local market till 1954, when the united front government took an initiative to revive the small and cottage industries. The East Pakistan Small and Cottage Industries Corporation (EPSIC) were established in 1957 by an Act to this end. During the war of liberation, the entire industrial sector including the cottage industries of Bangladesh was severely damaged. The government of Bangladesh took initiatives to rehabilitate and reorganise the cottage industries as an important sector for enhancing employment opportunities. EPSIC was reorganised and renamed as bangladesh small and cottage industries corporation (BSCIC). BSCIC stared providing financial and technical support and consultancy services to the artisans, craftsmen and entrepreneurs for promoting the traditional techniques beside modern technology. According to a survey conducted by BSCIC in 1981 there were 322 thousand cottage industry units in Bangladesh engaged in producing 160 different types of items. 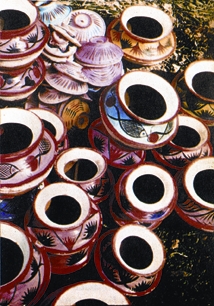 Pottery According to a survey conducted by BSCIC, published in a book titled Karupalli in 1985, there were 666 pottery villages in Bangladesh, where about 76 thousand people belong to 18 thousand families had to earn their livelihood from this traditional occupation. The total capital investment in the sector was 106 million taka and goods worth 367.4 million taka was produced during that period. Pottery is a family and community based collective work localised on the basis of availability of row materials. Most of the artisans engaged in this industry hereditarily and most of them belonged to the Hindu community.

Known as kumbhokar (potter or clay-modeller), the title of this caste is pala and they make dolls, statues of gods and goddess, household goods, sculpture, tally, flower vases, pots for offering worship, fancy kitchen pots made of clay. Bijaypur of Comilla, Madanpura of Patuakhali, Champaknagar of Feni, Kartikpur of Shariatpur and Royerbazar in Dhaka are the most remarkable and leading pottery localities. 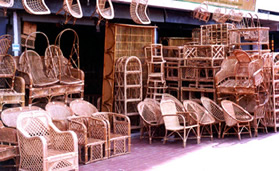 Jute goods Sika, a netted product of twisted jute ropes of various indigenous designs and motifs, table mat, shataranji and carpet, fancy handbag and bag of jute are produced in four thousand cottage industries by about eleven thousand craftsmen. Items worth 30.4 million taka were produced per year with the annual investment of 20 million taka. 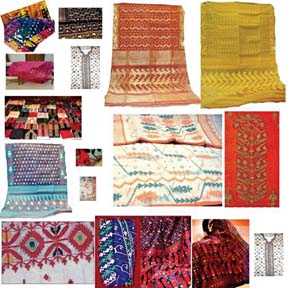 Textile and Weaving factories In 1978, about one million weavers, artisans and workers were engaged in 437 thousand handlooms and pure looms of 198 thousand weaving and textile factories of Bangladesh. The average annual production capacity of these looms was 1045 million yards of indigenous clothing like sharee, lungi, dhuti, muslin, jamdani, katan, malmal and traditional handloom products of different tribes, gamcha, mosquito nets and towels.

Embroidered Quilts The most famous stitch work of Bangladesh is embroidered quilts, known as Nakshi-Kantha.

Thirteen different types of high quality Nakshi-Kantha are stitched everywhere in Bangladesh, but those of Rajshahi, Nawabganj, Rangpur, Faridpur and Kushtia are very special in terms of traditional and exclusive design. According to BSCIC, 1500 cottage industries run commercially as promoters of stitch work have 3000 high-class artisans with a production capacity of goods worth 161 million taka per year. 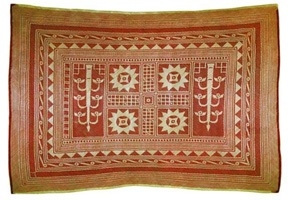 Cool Mat A special type of mat made by bark of a tree named morta. The mat, very soothing and cool to lie upon, is a traditional craft of Rajnagar, Balagonj, Baralekha and Mollarbazar area of Sylhet, Sonagazi and Raipur of Noakhali, Swarupkathi and Neelgati of Barisal and Shatech of Faridpur. Different designs and motifs of birds, animals and foliage from the nature and environment are portrayed by the artisans beautifully on the mat with red, blue, green, black and violet colours. About 15 thousand artisans produce cool mats of 50 million taka per year. Earlier in this country cool mats were made by silver and ivory.

Ornaments Ornament-making is one of the most fine and remarkable cottage based artisanship belonging to the mainstream anthropological art of Bangladesh. Womenfolk of the country love to increase their physical beauty by wearing fashionable ornaments in various parts of the body. Ornament makers are known as shwarnakar or goldsmith belonging to a particular caste of the Hindu. They had developed designs and motifs of foliage, fruits, flowers, birds, animals and stars mainly being inspired by the nature to make ornaments from generation to generation. According to BSCIC, there are 12,250 ornament-making units and 27 thousand professional goldsmiths in Bangladesh. Gold and silver ornaments of different variety to decorate the forehead and at the parting of the hair (sithi), ear, nose, neck, hand, waist and foot are made in Bangladesh. The leading ornament-making units are concentrated in Dhaka, Chittagong, Comilla, Sylhet and Faridpur region. The capital invested in this sector is estimated by BSCIC as 130 milion taka. 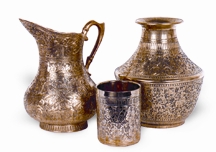 Beside BSCIC, Ministry of Youth and Sports, Department of Youth Development, Ministries of Women and Social Welfare, various Non-Government Organisations ngos extend financial, technical and marketing support to the artisans and craftsmen for the promotion of cottage industry. The government established a specialised bank named basic bank limited in 1989 to support this sector. [Masud Reza]