Cox's Bazar is consists of miles of golden sands, towering cliffs, surfing waves, rare conch shells, colourful pagodas, Buddhist temples and tribes. The most attractive tourist Resort full of bounties of nature in Bangladesh. Having the world's longest unbroken 120 k.m beach slopping gently down to the blue waters of the Bay of Bengal against the picturesque background of a chain of hills covered with deep green forests, Cox's Bazar is one of the most attractive tourist spots in the world. 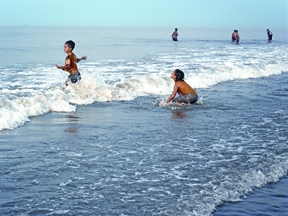 Attractions of the long sea-beach include the silvery waves of the sea breaking at the foot of hills at the hight tides, sea bathing, a trip along the beach by jeep, the view of the setting sun in the rolling sea-waves, the moonlit night, the exciting interior of the Bazar and its people. The romantic call of the daring sampans (boat), the waterfall, the forest, the artful Pagodas-all takes a tourist into surprise. Located at a distance of 152 km south of Chittagong one can reach this green hilly and flowery dreamland by Air, road and sea from Chittagong, and by air from Dhaka. The town is named after Lieutenant Cox, who died here in 1798 after he had established a colony of Mags, who sought shelter in British territory after the conquest of Arakan by the Burmese.

Himchari, 18 km south of Cox's Bazar along the sea beach is a nice place for picnic spot and film shooting. The famous 'Broken Hills' and waterfalls are located here. Another attraction is the row of 'Christmas trees.' 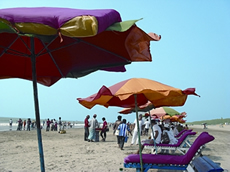 Ramu, a Buddhist village, about 10 km from Cox's Bazar, on the main road to Chittagong, has monasteries, khyangs and pagodas containing statues of Buddha in gold, bronze and other metals inlaid with precious stones. One of the most interesting of these temples is on the bank of the Baghkhali River. It houses not only interesting relics and Burmese handicrafts but also a large bronze statue of Buddha measuring thirteen feet high on a alter of six feet height. Sonadia, an island of about 9 square km is about 7 km off Cox's Bazar is sandy and deferent kinds of shells and oysters are found there. During winter fishermen set up temporary camps on the Islan and dry their catches of sea-fish. It is a paradise of migratory birds like petrel, geese, ducks and other water fowls etc.

Moheskhali, an Island off the coast of Cox's Bazar has an area of 268 square km. Through the centre of the Island and along the eastern coastline rises a range of low hills, about 300 feet high, but the coast to the west and north is a low lying tract, fringed by-mangrove forest. The Adinath a shrine, located here is the most attractive spot of the island especially during the festive month of Falgun (Bengali month).

Teknaf 80 Km south of Cox's Bazar, is a pleasure spot on the west bank of Naaf rivers, a small township. It is the southernmost tip of the main land of Bangladesh is and ideal tourist resort having comfortable accommodation like motel, well furnished Forest Bungalow on the hill top, Picnic, boating and other facilities also available for the visitors. Myanmar is on the opposite bank of the Naaf River. There are many Arakenese Maghs in this place. Wild animals and birds are seen here and the most attracting item here is a journey on the river. High hills with green forests stand on both sides of the river and the reflection of the view on crystal clear water of the river below is very enchanting.

st martin's island, the country's long coral island, is situated in the Bay of Bengal about 25 km away from the Teknaf. The island is reached by engine boat, ship or trawler from Teknaf during the winter when the sea remains calm. The island named after a British Governor Mr. Martin and the local people called it 'Narikel Jingira'- Coconut Island. This small coral island is inhabited by about few thousand and simple community of Muslims. They are descendants of 13 families, who migrated here in 1000 AD. Fishing and cultivation are their occupation. 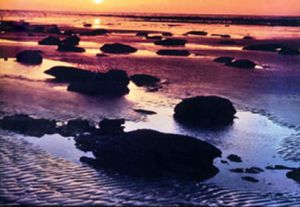 A trip to Chhera Dip another small island adjacent to St. Martin island. It is detached from St. Martin during high tide, where living corals can be seen, through about twenty feet deep transparent water. It is the only place in Bangladesh where one can observe living Coral.

The most interesting feature of Teknaf for visitors is the 'mathin's kup' (well). The legendary well of Mathin, is lying in the compound of Teknaf police station visited by hundreds of tourist everyday.

Mathins kup-well is associated with the thrilling story and its tragic end between Mathin, daughter of a Mogh king and Dinraj Bhattacharya, the then officer in charge of Teknaf police station and the famous writer actor of this sub-continent.

Mathin used to come every afternoon with her companions to fetch water from this well for fun. At that time Dinraj fell in love with her. But the Mogh king refused to give marriage of his only daughter to him who belonged to Hindu community. But at last love got the upper hand and the king agreed with the marriage proposal. But father of Dinraj Bhattacharya sent a telegram to Dinraj to go to Calcutta immediately to see his ailing father who was in deathbed. Dinraj left Teknaf for Calcutta and never came back. When Dinraj boarded ship for Calcutta being lightly shocked Mathin stopped taking any food. Mathin's relatives failed to make her to take any food not even a drop of water. At last she died.

It is neither a story nor a fiction. It is a fact which the writer- actor Dinraj Bhattacharya honestly depicted in his famous book titled Jokhon Police Chilam. He also identified this well as Mathin well in his famous book.

This Mathin's well associated with the true love story of Mathin and Dinraj Bhattacharya is now like a legendary folk story and as such a great attraction to tourists. [Mofazzal Hossain]