Crane (saras) a large, long-legged wading bird of the family Gruidae, order Gruiformes. Cranes have long, slender necks and bills, and powerful wings. These elegant birds can be seen in North America, the Old World and Australia. Often brightly coloured, both sexes of the birds perform elaborate courtship rituals. They are sometimes confused with herons, but are usually larger and have a part-naked head, heavier bill, more compact plumage and elevated hind toe. In flight the long neck is stretched out in front, the stiltlike legs trailing out behind. They are more closely related to rails. Cranes are marsh- and plains-dwelling birds, and feed on grain, and other vegetable matter, as well as insects, and other small animals. There are 15 species of cranes worldwide, of which Bangladesh has two, one of them being migratory. The crowned crane Balearica pavonina of Africa is considered to be closely related to the ancestral stock that subsequently gave rise to the 14 other species. Within this latter group, the Siberian crane Grus leucogeranus is somewhat the Orient, and the attractive red-crowned crane Grus japonensis is prominent in their art. Cranes are, in fact, long-lived birds- one captive Siberian crane died at the age of 83 years, having successfully fathered chicks in his 78th year! 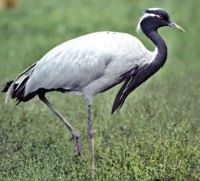 Cranes are best known for their loud calls, spectacular courtship dances, monogamy, and the care they lavish on their young. A crane pair will defend a large acreage of wetland and grassland as their breeding territory. Intruders are buffeted by trumpeting duets of the defending pair. In a secluded area, a platform nest is constructed in shallow water, and typically two eggs are laid.

Both sexes participate in incubation and care the young; then the crane chicks remain with their parents until the onset of the next breeding period. Cranes of the northern continents migrate thousands of kilometers between breeding and wintering areas. Juveniles learn the route by accompanying their parents throughout the autumn migration.

The destruction of their wetland and grassland habitats, as well as hunting on the northern continents and, more recently, poisoning in Africa, have eliminated these magnificent and space-demanding birds from much of their former range. Seven species are listed as endangered globally.

The rarest is North American's Whooping Crane Grus americana, which in 1941 was reduced to just 15 individuals in the wild. Canada (where the cranes breed) and the USA (where they winter) have cooperated on conservation measures and there are now 181 whooping cranes in the original migratory population. If protected, most species of cranes are remarkably adaptable to surviving in close proximity to humans. The tallest crane, the sarus of the Indian subcontinent (also found in Bangladesh), is protected by Hindus in India and thrives in densely populated areas, breeding at the edge of village ponds and foraging in agricultural fields. Mongolians protect the Demoiselle Crane Anthropoides virgo (a winter visitor to Bangladesh and other parts in the region), and on vast grasslands cranes often nest and forage near settlements. Likewise in regions of Africa where the crowned crane is protected, cranes roost at night on trees within the villages. The most abundant species is the North American Sandhill Crane. More than half a million birds gather each March along 65 kilometers of the Platte River in central USA before continuing north to their northern breeding grounds. Thousands of tourists travel to Nebraska in spring to see one of Earth's greatest wildlife shows: the staging of the hordes of Sandhill Cranes. [Md Anwarul Islam]