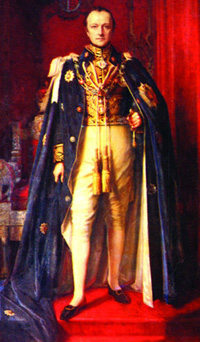 Curzon, Lord (1859-1925) Governor General and Viceroy of India (1899-1905). George Nathaniel Curzon, the eldest son and heir of Lord Scarsdale of Kedleston in Derbishire, was born on 11 January 1859. He was educated at Wixenford Public School in Hampshire, Eton and Balliol College, Oxford. With a strong and unbroken Conservative family background, Curzon grew into an acknowledged conservative. He did not hold very many high offices before he became the Viceroy of India. Formerly, he represented Southport as an MP in the Parliament (1885-86) and was a Parliamentary Under Secretary for India (1891-92) and Foreign Under-Secretary (1895-98). He got utterly surprised and thrilled when Prime Minister Lord Salisbury offered him the post of Governor General and Viceroy of India.

Lord Curzon had successive two terms to preside over the Indian empire. The first term (1899-1904) marked the apogee of the imperial system under his paternalist care and ended gloriously. He accepted a successive second term offer, but only to resign within a year in the face of extreme controversies resulting from his measures. As a representative of the Conservative Government, Lord Curzon was expected to serve the British empire as its paternalist figure. Eloquent, masterful, and energetic, Curzon had previously visited India four times and had been for three years the Under-Secretary of State for Foreign Affairs.He was not therefore ignorant of Indian affairs altogether. Like wellesley and dalhousie before  him, Curzon was not expected by parliament to found an empire which was already there though in unsteady form, but to build it structurally on the strongest foundation.

Frontier policy Curzon's earliest policy measure was to withdraw troops from Chitral, the Khyber, and the Khurram valley, which were not directly governed by British India. His policy was to use the concerned tribes to protect themselves with British help, if necessary at all. This policy kept the frontier quiet until the end of the First World War. Linked with this frontier policy was the creation of the North-West Frontier Province.

Internal administration There was no part of the administration, from the rent assessment at village level to the expenditures in the vice regal household, into which Lord Curzon did not look over. He undertook a complete overhaul of the whole bureaucratic machine. As preludes to reform, he tried to identify weaknesses and defects of office management, department by department.

Regular delay in office attendance, slow movement of files, uncalled-for lengthy noting on files, writing long minutes in flamboyant style, endless and purposeless movement of files up and down the desks, taking the stereotype as the model, dependence on the subordinates for even a trifling matter etc tormented him. He had a very poor opinion of Indian Civil Service. Therefore, he took the most unprecedented steps by personally supervising the office improvement measures. Even the offices of the ICS officials came under his scrutiny. He asked them to take initiatives in introducing good governance.

The civilians coldly received Curzon's paternalistic outlook, but finally they gave in and followed him as faithfully as the British bureaucracy followed the Prime Minister. Based on the police report of 1903, Curzon reorganised the Indian and provincial police services. He brought changes in dilatory office procedures.

Most remarkable was Curzon's dealing with the land question. He noticed that the rent rate of raiyats cultivating khas (government owned) land was much higher than that of the zamindari peasants. He issued orders to scale down rent for khas land. The most famous was the Punjab Land Alienation Act, which aimed at protecting cultivators from eviction from their lands for debt and prohibiting non-agricultural people to take control of land. He created an Agricultural Department to promote scientific agriculture. An experimental farms and research institute was set up at Pusa in Bihar. A more positive measure was the establishment of co-operative societies in order to emancipate the peasantry from the bondage of the mahajans (moneylenders).

Curzon's idea of improvement was rooted in the balanced development of agriculture, industry and communication to all of which he paid due attention. By the end of the 19th century, India had 27000 miles of railway. To this, Curzon added 6000 miles more, a phenomenal development in terms of growth rates. For better management, railway was transferred from the public works department to a newly established Railway Board, which operated the state railways and made plans for their development. A new department of commerce and industry was created to deal with exclusively the commercial and industrial questions. Besides railways, Curzon pushed forward irrigation works with equal vigour. He set up a commission (Scott-Moncrieff Commission) which planned extension of irrigation works at a cost of Rs 40 million.

Though an arch imperialist, Lord Curzon rounded off his material development by cultural activity. He conceived and carried out the project of erecting a monument of British rule, the victoria memorial in Calcutta. He founded the Imperial Library to be the Bodleian of Oxford or British Museum of the East. By establishing the Department of Archaeology for the conservation of the Indian artistic heritage and the carrying out of new excavation, Lord Curzon had firmly institutionalized the pioneer work of General cunningham and others whose initiatives were seldom followed up by required institutionalization. He ruthlessly evicted offices and officers from the sites of historical monuments. In these works and in organising archaeology, Curzon was fortunate to find a new Cunningham in Sir John Marshall.

Curzon's glorious administrative record was largely marred by two controversial policies. One was the education policy marked by the universities act, 1904. The Act aimed at reforming the university of calcutta and its relations with other educational institutions. So long the Calcutta University had been operating only as an examining and affiliating body without any educational agenda of its own. Curzon's reform had introduced post-graduate department in the University. To the people this reform was salutary indeed. But bitter criticisms were aroused by his other reforms affecting management of schools and colleges. Under the Universities Act, government nominees were made predominant on the governing bodies of schools and colleges. Affiliations and grants-in-aid were subjected to many stringent conditions. Curzon's education reforms were obviously interpreted by the nationalists as an attempt to keep the educational institutions under tight imperial control.

The second and most controversial reform measure was the partition of bengal. In the name of improving the efficiency of the traditionally neglected Bengal province, Curzon divided it into two halves (a) West Bengal and (b) East Bengal and Assam. The nationalists again interpreted this measure as a project of imperial control that was increasingly coming under threat from the Bengali nationalists. The Congress branded it as a policy of 'Divide and Rule'. The resistance to the partition measure took the forms of Swadeshi and Terrorism, which practically shook the foundation of the British empire in India.

Curzon, who was so confident and boastful in dealing with the native people and who once commented about the nationalist leaders of the Congress that they were 'incapable of setting the Ganga on fire', was now so disgruntled and disturbed that he was really looking forward for an opportunity to leave the job with honour. Lord Kitchener, the commander-in-chief of the Indian army, provided the opportunity. On the issue of army reforms, Curzon and Kitchener differed fundamentally. Curzon felt that the India Office was favouring Kitchener. He thus responded to the situation by his resignation in August 1905, which the India Office accepted at once. The Bengali nationalist bhadralok class in fact affected Curzon's nemesis. About them he remarked disparagingly, 'they are not an inspiring or manly race'. Curzon died on 20 March 1925. [Sirajul Islam]