Difference between revisions of "Dakshineswar Temple"

Dakshineswar Temple is dedicated to Kali (Bhavatarini) at Dakshineswar (Daksineshvara) on the bank of the Hughli river, Calcutta. It is associated with the name of Ramakrishna Paramahangsa. The temple, in conventional Nava-ratna style, measures 46 feet square and rise over 100 feet high. It is one of the largest temples of Calcutta. In Calcutta Nava-ratna or nine pinnacled temples seem to have been preferred to the pancha-ratna or five pinnacled ones, especially for their monumental effect. 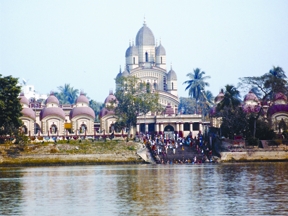 The temple is a large elongated building standing on a high platform with a flight of stairs. The three-storeyed south-facing temple has nine spires distributed in upper two storeys. The roof of the spires is beautifully ridged resembling Pirhas. A narrow covered verandah serves the purpose of an audience-chamber attached to the sanctum where the goddess Dakshina Kali stands on the breast of Shiva. There is a long spacious Natmandir (Dancing hall) in front of the temple. There are other subsidiary shrines on this temple compound. To the north of the Kali-temple is a Dalan of Radha-Krsna. To the west, twelve Siva temples of Bengali atchala style stand in rows on the Hughli river with a 'chandni-bathing ghat, which is flanked by these Siva temples, six each on either side. The temple compound on three sides - north, east and south - is enclosed by rows of guestrooms and offices.

The main temple of Kali and other subsidiary shrines do not bear either inscriptions or ornamentation except a few terracotta floral motives and some plasterwork on the walls of the main temple and Natmandir. The celebrated Rani Rasmani of Janbazar, Calcutta, built the temple complex in 1855 AD. [Pranab Ray]