Administration Damudya Thana was formed in 1975 and it was turned into an upazila in 1982. 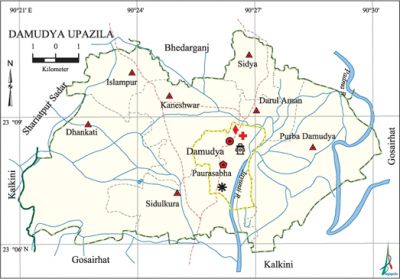 History of the War of Liberation In 1971 the freedom fighters of Damudya mainly conducted guerilla type of war against the Pak army. Both the Mukti Bahini and the Mujib Bahini played distinctive role during the War. A frontal encounter between the freedom fighters and the Pak army was held on the southern side of the present Damudya College in which freedom fighters Ahsanul Hoque and Abdul Wahab were killed. Huge damages to properties were caused when the local razakars set the Damudya Bazar on fire on 15 October 1971.

Marks of the War of Liberation Memorial monument 5.

Hats, bazars and fairs Hats and bazars are 7, fairs 4, most noted of which are Damudya Bazar, Kailara Bazar.

Sources of drinking water Tube-well 90.84%, pond 5.48%, tap 0.18% and others 3.50%. The presence of intolerable level of arsenic has been detected in shallow tube-well water of the upazila.